Thank you, Trishala Dutt, for this adorable blast from the past 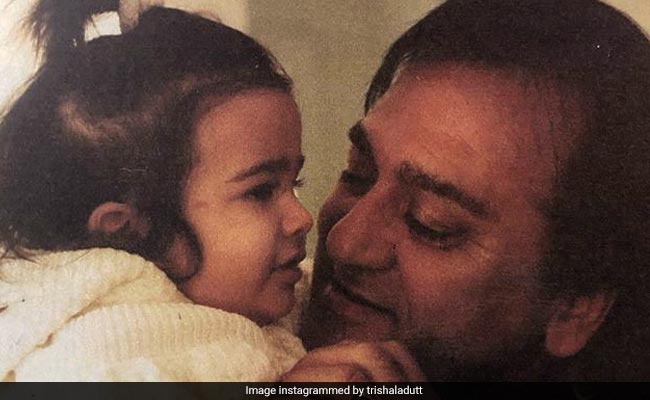 Sanjay Dutt's daughter Trishala Dutt took a trip down memory lane and landed straight in her childhood. In doing so, Trishala picked out one of her favourite photos from the pages of her family album and had to had to share it with her Instafam. Trishala's Throwback Thursday post features a pint-sized version of herself along with grandfather Sunil Dutt (Sanjay Dutt's father). Trishala captioned the photo perfectly. "Priceless," she wrote in a single hashtag and remembered her "dadaji" with the heart icon. In the photo, Trishala Dutt is cuteness overloaded as she adorably plays with Sunil Dutt.

Trishala Dutt is Sanjay Dutt's daughter with his ex-wife Richa Sharma. Trishala also often remembers her mother with heart-wrenching throwback memories such as this.

Meanwhile, on Sunil Dutt's birth anniversary last year, Sanjay Dutt paid tribute to the legendary actor with a black and white photo, writing: "Happy Birthday, dad. I miss you." The photo features a tiny version of Sanjay Dutt - he's the one in the polka dotted shirt. Sanjay Dutt co-starred with his father for the last time in 2002 film Munna Bhai MBBS.

Happy Birthday Dad. I miss you!

In another piece of throwback gold shared last year, Sanjay Dutt appears along with his parents Sunil Dutt and Nargis and sisters Priya and Namrata. "The pillars of our family! I miss you mom and dad," he captioned the photo.

The pillars of our family! I miss you Mom & Dad

Sanjay Dutt married Maanayata in 2008 and they are parents to twins Shahraan and Iqra. Maanayata and Trishala Dutt share a close bond. Trishala often joins Sanjay Dutt, Maanayata and the twins on family trips and outings.