Parineeti Chopra Is "Freee". Only Priyanka Chopra Knows The Reason

The two never fail to give major siblings goals 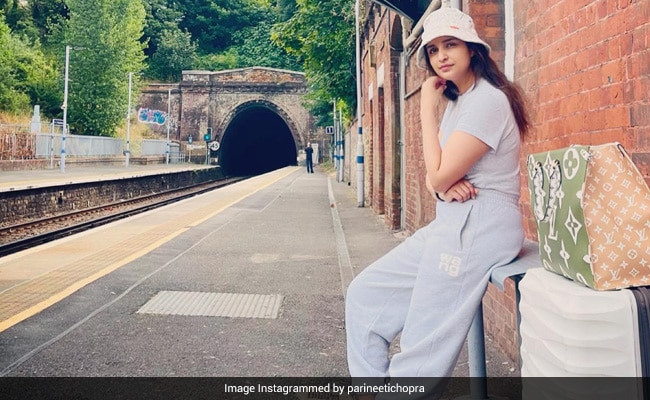 Parineeti Chopra is feeling “freee”. We aren't saying this. She herself did. The actress has shared a picture featuring herself clicked at St Leonard's Warrior Square station in the UK. Parineeti looks stunning in a street-style look. Along with the photo, the actress wrote, “Freee” and added a flying bird emoji. Well, if you are wondering what Parineeti is trying to say here, then you must go through her cousin, actress Priyanka Chopra's comment under the post. Priyanka wrote, “Yay” along with a red heart eye emoji. To this, Parineeti added, “Priyanka Chopra, I meannn . Noone knows it better than youuu.”

Parineeti Chopra and Priyanka Chopra share an amazing bond. From leaving notes for each other in the comments sections to sharing heartwarming notes on special days, the two are sister goals. On Priyanka Chopra's birthday, this year, Parineeti made it a point to be with her “mimi didi”. She shared pictures from Priyanka's birthday bash in Mexico and wrote, “It was a whirlwind 48 hours of pure celebration, jet lag, tacos, hugs, laughs and the ocean. Will take a week to recover from, and a lifetime to forget.  Happy bday to the world's desi girl, but my mimi didi. I love you.”

Parineeti Chopra will next feature in Uunchai, directed by Sooraj Barjatya. The film also stars Amitabh Bachchan, Anupam Kher, Boman Irani, Neena Gupta and Sarika in crucial roles. Danny Denzongpa is also part of the film. It will hit the theatres on November 11.

Apart from Uunchai, Parineeti Chopra will share the screen space with Akshay Kumar in Tinu Desai's next. Parineeti and Akshay were last seen together in Kesari.

Meanwhile, Priyanka Chopra is having a gala time in Mumbai. After all, the actress is in India after three long years. From sharing glimpses of her desi food binge-eating sessions to pics from her work commitments in the city, Priyanka is clearly having a blast.

Priyanka Chopra will be next seen in Citadel.