Hindi cinema saw some spectacular performances in 2017, with several great actors finally getting the chance to stun. Here are the best of the best 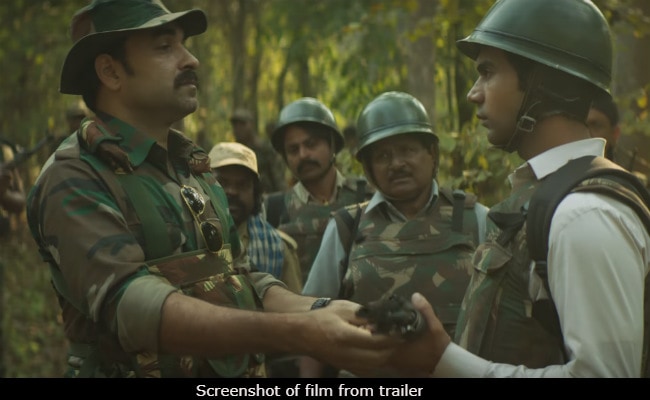 Mumbai: This year, the first rule I made when making this list was that I would only include one actor one time. I have never strung to that limitation in the past, judging each performance individually, but this has been an astonishing year for a couple of actors - the two men topping this list - and I could easily make a top five or six actors of the year list just by throwing their work together.

In my final yearend list, here are the ten finest male actors Hindi cinema had to offer:

Clipped efficiency is not something Hindi movie heroes specialise in, not least a leading man in an operatic film about war and love. Kapoor is solid as a brusque and unyielding Army man, keeping a cool head, hatching a conspiracy, and barking orders believably in Japanese. Then love comes along and screws him over, and Kapoor makes sure we believe how badly crushed he is.

That Khan is not much higher up this list is testament to how great an actor he is, and how little he had to dig into his box of tricks for this film. Playing a 'designer' clothing retailer who tries first to fit in among Delhi snobs (who may actually not be as rich as him) and then pretends to be a peasant for the sake of a school admission, Khan is evocatively hapless in both parts. It is when his wife-pleasing character is left in control, which is very rare, that the actor shines brightest: like when he's watching Naagin serials on television with knee-slapping glee, or when thickly laying on sales patter to sell wedding lehngas to the easily influenced. The man is a master.

It is when watching Aamir Khan play an obnoxious, sleazy man that it becomes clear how seldom our deified superstars allow themselves to truly get their hands dirty. This is a pity because of how good Khan is when he lets his hair down, like in this caricatured role as a once-talented music composer. It is tremendous fun to watch Khan wear clothes Gurmeet Ram Rahim Singh could have designed and purr lecherously at secretaries.

What do you do when you know your time is up? There is no rationale or logic Behl's character, Daya, can use to justify his conviction that his clock is running out. He just feels his life has been lived, and that - like his father before him - he is ready to let go. This is a quiet but frequently bright-eyed performance, and Behl is superbly believable. He can be an exasperating character, but he is a loveable man who wins the audience over, especially when he lets life itself seep into his own final act.

It is far harder - pun inevitable - to play a man with erectile dysfunction than it is to play a man with super-powered sperm, as Khurana had in his breakout role, Vicky Donor. In this film he plays a perfectly nice guy who can't seem to get it up, a secret shame that is suddenly broadcast all over his upcoming wedding, prompting doubt and dubious remedies.

Khurana is a reliably strong actor who always gets into the skin of his character - he was smashing in Bareilly Ki Barfi as well - but merely taking on this role shows his fearlessness and commitment as a performer. Top stuff.

Kaul plays a supportive husband, a man who gets home from a hard day at work and eagerly massages his wife's feet to make her happy. He is the kind of everyman who gently tries to avoid confrontation at all times, when being yelled at unfairly in the workplace or even when his wife's family is victimising her. This is the kind of person the audience wants to see good things happen to, and thus when Kaul gets a shockingly sexy phone call from his wife and gets aroused enough to caress a mannequin, we're genuinely thrilled and share in his elation.

Life, death, salvation. These are lofty and beautifully intricate concepts, but what exactly do you tell the boss when asking for more time off from work? Hussain's character Rajeev is forever flailing between the pragmatic and the profound, wondering if his father's readiness for death makes any sense at all, and also questioning whether the hotel that promises salvation is itself haunted.

Hussain sticks his stomach out and delivers an excellent, understated performance, internal and universal in the most effective way. His helplessness is a thing of grace.

We have frequently and righteously slammed the idea of grown men playing children in our movies that tend to indulge and infantilise superstars, but when someone like Kapoor - at 37 - can convincingly play a stiff-haired schoolboy, one must pause for thought. And for applause.

Jagga is a stammering sleuth whose eyes frequently open wide with curiosity when he's drinking in the facts and narrow noticeably with doubt as he scrutinises suspects and evidence. It is a comic-book performance with a character drawn up in broad strokes as the film musically sends him on a wild and twist-laden adventure.

As one of our most talented leading men, Kapoor brings to the part a visible intelligence as well as fragility. Jagga, who needs to break into song to string a sentence together, is an ace detective, sure, but is also a broken boy dealing with a broken girl and a broken father-figure. An inimitable and imperfect boy.

Stranded and starving in a Bombay apartment, Shaurya is driven to fashioning a catapult from his underwear. He tests its elasticity and then starts working on his aim. At long last, he manages to shoot down a pigeon - that nemesis of the daytime apartment-dweller - and it is only when he succeeds in this hard-fought endeavour that Shaurya expresses the true greatness of his dilemma: the starving man is a vegetarian.

Rao is a spectacular actor, currently going through a Midas streak, shining across several very different films back to back. This year, he has been remarkable in Newton and absolutely spectacular in Bareilly Ki Barfi, but each of those films gave him other fine actors to play off. This film demands that he go it alone, and, in creating a character who is both credible and, ultimately, desperately heroic, he gives us someone to root for as he aims at several small, significant victories.

Some films are made to showcase actors. Rao is himself a showcase.

Bonafide brilliance in the movies comes across only once in a blue-moonlit Friday, and when it does it is impossible not to see it. Tripathi had a sensational year, dropping our jaws with unbelievable aplomb in films as diverse as Gurgaon, Bareilly Ki Barfi and Anarkali Of Aarah. He is a stealer of scenes and a master of silent moments, letting his eyes and his brow often do the talking for him. He is an actor who breathes.

Tripathi is the soul of Newton. He literally plays a character called Aatma Singh, a man who has earned too much unchecked authority to follow orders. After all, what good is playing by the book when nobody seems to have read it? The system is flawed, and Aatma is one of the men holding it in place - or at least that's what his ego claims. He is an asker of questions, an offerer of eggs, a folder of arms and, as I'd gushed in my review, a most inscrutable character. There's something exquisite in how the title character Newton and we, the audience, remain unable to read this man.

Thank you, Mr Tripathi. Long may you confound us.


Promoted
Listen to the latest songs, only on JioSaavn.com
(Raja Sen is a film critic, columnist and screenwriter. His first book, The Best Baker In The World, is a book for children that happens to be an adaptation of The Godfather, and is in stores now.)