Akshay Kumar, who plays the lead role in PadMan has posted a super adorable message for Twinkle Khanna 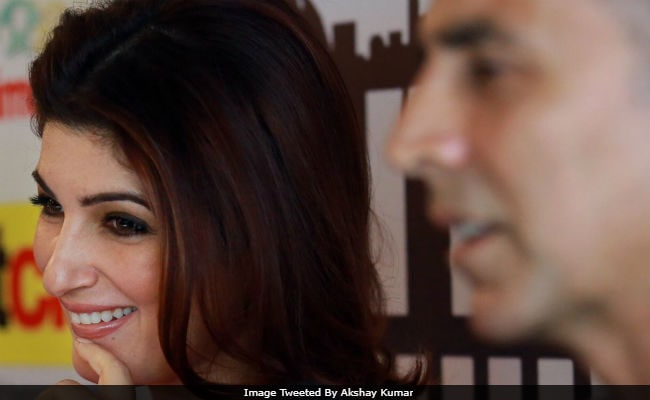 New Delhi: Akshay Kumar's PadMan hit the screens today and has so far received positive reviews. The film is based on entrepreneur Arunachalam Murugunantham, who invented low-cost sanitary pad making machines and created menstrual hygiene in his village. Akshay Kumar, who plays the lead role in PadMan has posted a super adorable message for the 'gorgeous superwoman,' who is behind making the film a reality. Yes, none other than his wife Twinkle Khanna, who has also produced PadMan. "The real #PadMan had his wife to thank for his story, so does the reel #PadMan. Full credit to this gorgeous superwoman for finding, chasing and making this film a reality. Over to you guys now," Akshay posted on social media, adding a picture with Twinkle Khanna.

The real #PadMan had his wife to thank for his story, so does the reel #PadMan :) Full credit to this gorgeous superwoman for finding, chasing and making this film a reality. Over to you guys now. #PadManTodaypic.twitter.com/8GuOjbiHCE

Akshay and Twinkle screened the film on Thursday for their Bollywood colleagues. Of making a film like PadMan, Akshay had earlier told news agency PTI, "I always wanted to work and make such films but I was not a producer during that time. I didn't have enough money but now I can. My wife told me about Muruganantham and then we met R Balki. So we thought about making this movie. Even Hollywood has not a film on sanitary pads or menstrual hygiene. People always make documentaries but they don't want to make commercial films. We have tried to do that."

Ahead of PadMan's release, the real life 'Pad Man' A Muruganantham congratulated and thanked Twinkle Khanna and the team for making the film and wrote, "When I started, I never imagined that a movie will be made on my story. 20 years now, and I'm grateful for everything that has happened." He also thanked his wife and wrote, "I finally thank my wife without whom I think there wouldn't be this innovation and this moment."

It's going to be an emotional day! @akshaykumar@mrsfunnybones@sonamakapoor@radhika_apte@pcsreeram@ItsAmitTrivedi@PadManTheFilm#PadManpic.twitter.com/TZUQTXQCcT

Both Akshay and Twinkle also thanked Mr Muruganantham for the 'inspiration.'

Thank you for giving me such an inspiring role to portray, thank you for the trust and sharing your story and journey with us and lastly thank you for PAD MAN https://t.co/6q2OYIjaRb

I am getting all emotional myself-reading this as I sit outside the screening where friends are watching Pad Man for the first time! Thank you for trusting us with your story @murugaofficial - It has been an honour to be part of your journey https://t.co/TEq9O59CYf

Promoted
Listen to the latest songs, only on JioSaavn.com
Box Office India reports that PadMan got a 'fair start' in the morning and the business is likely to 'go up' on Saturday.