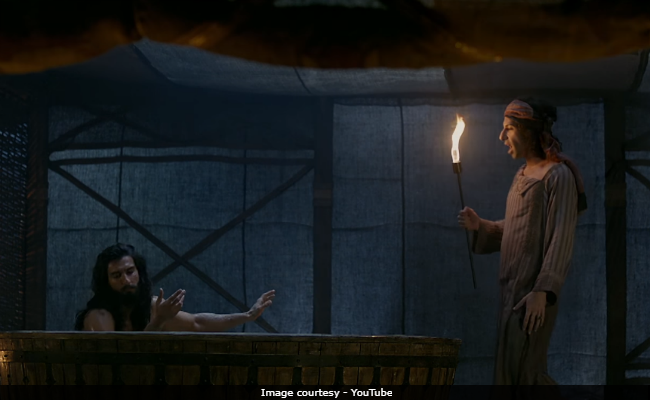 New Delhi: "Padmaavat"'s new song Binte Dil, featuring Ranveer Singh and Jim Sarbh, is officially released. In the voice of singer Arijit Singh, Binte Dil, is about a sensual confession of love by a man for a man, who's clearly obsessed with someone else. Written by A. M. Turaz, the Urdu lyrics have been brilliantly teamed with Middle Eastern music. And, who other than our music maverick Sanjay Leela Bhansali, could have done it? Jim Sarbh, who plays Malik Kafur has done justice to this sultry song, and the screen space is totally owned by him. You simply cannot ignore the soaring sexual chemistry between the two.

Those of you, who haven't watched the film, Ranveer Singh played Alauddin Khilji - a bisexual ruler - who was gifted Malik Kafur, a prominent eunuch of Afghani descent, as a slave. Talking about his role, Ranveer Singh told mid-day that the bisexuality factor added another layer to Khilji's complex personality.

Throughout the film, Kafur tried to make his intentions evident, but in this song, he disguised his love behind Khilji's obsession with Rani Padmavati.

Talking about the song, Jim told Scroll.in, "All I did was try to match the emotion in the extremely soaring lyrics voiced by Arijit Singh, and as Sanjay sir once told me after he heard the song: lip syncing to this is an actors' nightmare."

Padmaavat is a 13th-century epic period-drama based on the narration of Sufi poet Malik Muhammad Jayasi. The film was released on January 25 and has earned more than Rs. 150 crore.
Comments
padmaavatBinte Dil SongRanveer Singh