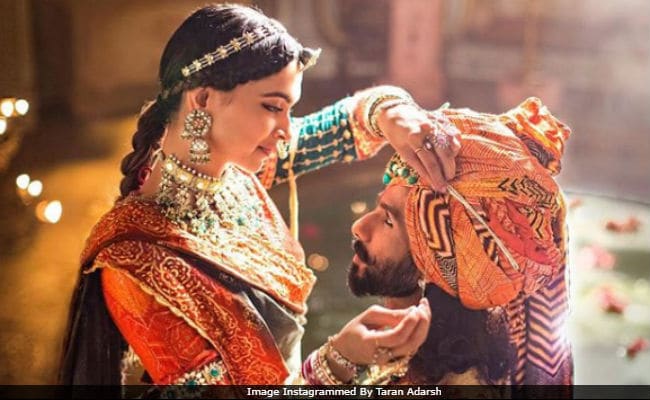 New Delhi: The first week for Deepika Padukone, Ranveer Singh and Shahid Kapoor's "Padmaavat" has concluded on a 'glorious note,' tweeted trade analyst Taran Adarsh. The film, directed by Sanjay Leela Bhansali, has earned Rs 166.50 crore and is 'expected to surpass' the business of Bajirao Mastani (Deepika and Ranveer's 2015 film, also directed by Mr Bhansali) in Week 2, he added. Till Wednesday, "Padmaavat" had collected Rs 155 crore and Rs 11 crore more was added to its Thursday's business. "#Padmaavat concludes [extended] Week 1 on a glorious note... Superb business over the [extended] weekend... Rock-solid business on weekdays... This, despite no-screening in few states... However, the terrific business in other states helped put up a fantastic number," Mr Adarsh wrote. "Padmaavat" released after a month's delay amid huge protests by Karni Sena.

He also mentioned that the business of "Padmaavat" would have crossed Rs 200 crore if all the states would have screened the film.

#Padmaavat concludes [extended] Week 1 on a GLORIOUS NOTE... SUPERB biz over the [extended] weekend... ROCK-SOLID biz on weekdays... This, despite no-screening in few states... However, the TERRIFIC biz in other states helped put up a FANTASTIC number...

Had it been a smooth, all-India release, #Padmaavat would've comfortably crossed 200 cr in its [extended] Week 1... The film lost out on [approx] 50 cr+ due to no-screening in few states + protests... Its international biz is REMARKABLE [esp North America and Australia]...

In his review for NDTV, film critic Saibal Chatterjee praised Ranveer's performance and wrote, "The director's most willing ally in this endeavour is Ranveer Singh, ebulliently evil and visceral in his portrayal of a venal villain on the rampage. He is never short on energy."