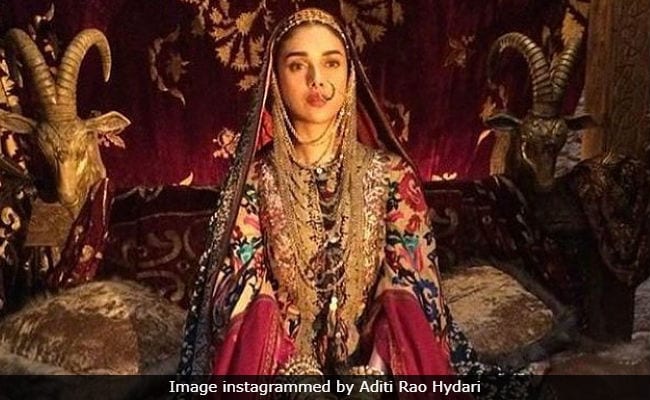 Actress Aditi Rao Hydari, who received acclaim for her brief yet evocative role as Mehrunissa in Sanjay Leela Bhansali's epic drama "Padmaavat", says that dreams do come true if they are guided by right intention. She also feels that she has guardian angels as she is currently living her dreams. "I think every film and every experience helps you grow and learn, I would say Mani Ratnam's film and "Padmaavat" made me believe that if you have a dream and your intentions are guided by that dream then it does come true," Aditi told IANS in an interview.

She continued: "They are legendary directors and for me with no backing to be living that dream has been so fulfilling (that) I feel blessed... I do know that it makes a difference to ones career to have experiences like these and I am grateful for them. I am convinced I have guardian angels."

When asked if she feels that she has finally arrived in Bollywood just like she is known for her fashion sense, she said: "I don't even think like that, these things are for others to say. I'd rather put my energy and love into my work, the people I love and living and loving every second of my life."

"I don't like to shout about myself from the roof tops. Firstly a director and the whole team has made it happen for me, secondly there is so much noise, why shout above the chaos?... I'd rather keep that energy for when I'm in front of the camera."

So which roles are closest to her heart?

"I loved playing Leela in Mani sir's love story (Kaatru Veliyidai). It was an epic and fraught love story...I've loved playing Mehrunissa, I felt lucky to have been picked to play such a beautiful person...And my most recent Sammohanam in Telugu which is a huge success and still playing in theaters... I always wanted to do a films like My Week with Marilyn, Notting Hill and Roman Holiday so I jumped at this opportunity."

The actress says that she likes roles that have character.

"They (heroines) can be feminine, vulnerable but also are strong and fearless. I am drawn to characters like these. I think we have to be the change we want so as girls in the industry, we are pushing for the change and I hope industries all over India push for this change... not just us girls. Women are an integral part of any story real or reel," she said.

Aditi is currently shooting Mani Ratnam's next film along with a film set in space directed by Sankalp Reddy.

Promoted
Listen to the latest songs, only on JioSaavn.com
"I'm trying to do pan Indian work. I want to keep working with the best story tellers and directors. They inspire me, they have made me and taught me whatever I know," said the actress.