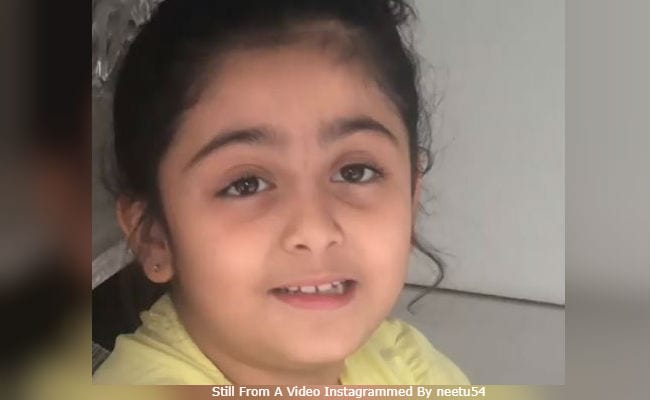 New Delhi: Ranbir Kapoor's niece Samara, 6, has shared tips to reduce global warming on World Environment Day. Samara's video has been shared by her grandmother Neetu Kapoor with the caption, "Some useful tips from Sam #SamStories #GlobalWarming." "Good afternoon, everyone. Today I'm going to talk about global warming," she says in the video. To reduce global warming, here are some tips from Samara - a) Use more normal brushes and less electric b) Do more carpool c) Remember to put the switch off when your phone is charged. (Take notes, folks). "Samara is so adorable" and "bright and cute" are the comments posted on the video. Months ago, Samara had made an anti-pollution plea via video, which was shared by her dad Bharat Sahni.

(Cute, na? Neetu Kapoor, thanks for sharing this).

This is what she said while making an anti-pollution plea.

My lil firecracker giving a lot of gyaan on pollution !!! #samstories #lovethiskid #

Samara is a cute little rockstar and these videos and pictures are proof. Just recently, Neetu Kapoor shared a video of her singing Nachdi Phira from Aamir Khan's Secret Superstar.

And, this video too was adorable.

Wat to do with her #samstories

Samara is the daughter of Riddhima Kapoor Sahani, who is a jewellery designer. Ridhdima is married to businessman Bharat Sahni. The family of three live in Delhi.

Promoted
Listen to the latest songs, only on JioSaavn.com
A picture of her with uncle Ranbir had gone crazy viral.

Ranbir is Rishi and Neetu Kapoor's younger child. He is currently awaiting the release of his much-anticipated film Sanju, directed by Rajkumar Hirani. Sanju is a film on actor Sanjay Dutt.