"Nobody can match the size of your heart," wrote Athiya Shetty 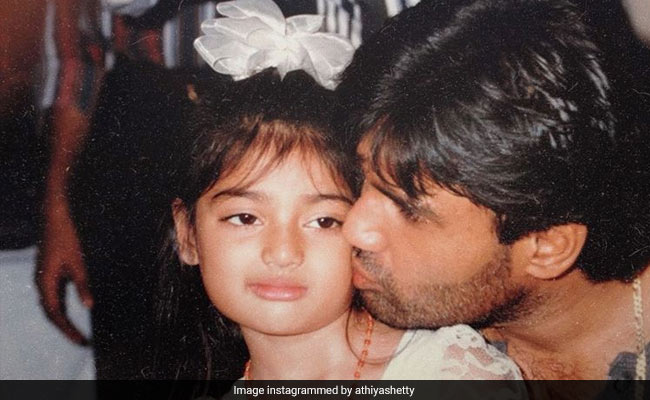 On Bollywood actor Suniel Shetty's 59th birthday, the cutest wish arrived from his daughter and actress Athiya Shetty. She shared a chunk of memories in the form of a throwback picture and a video on her Instagram profile on Tuesday. In the picture that happens to be from Athiya's childhood days, Suniel Shetty can be seen planting on a kiss on her cheeks. In the video posted by the actress, Suniel Shetty can be seen giving little Athiya a piggyback ride. The father-daughter duo can also be seen dancing to the song Sona Sona from the 1998 film Major Saab. Athiya captioned the post: "To my wisest teacher, greatest protector, toughest workout buddy and my bestest friend, happy birthday! Love you papa, nobody can match the size of your heart."

to my wisest teacher, greatest protector, toughest workout buddy and my bestest friend, happy birthday! love you papa, nobody can match the size of your heart. @suniel.shetty

In terms of work, Suniel Shetty was last seen in Darbar, which released earlier this year. The film starred Rajinikanth in the lead role. The actor will next be seen in Marakkar: Arabikadalinte Simham, Mosagallu, Mosagallu and Mumbai Saga.