"Everything is on hold for now," said Suniel Shetty 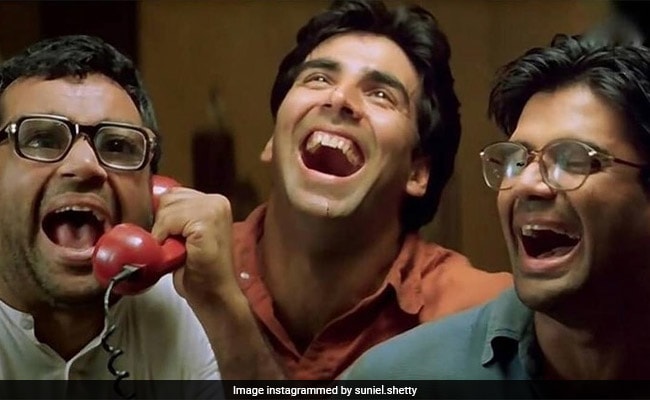 Suniel Shetty, in an interview with Mumbai Mirror, shared an update about his much-awaited film Hera Pheri 3 and revealed that it is "on hold" as some "differences need to be ironed out." Hera Pheri 3 is the third part of the cult classic Hera Pheri, which starred Akshay Kumar, Suniel Shetty and Paresh Rawal in the lead roles. Talking about the work-in-progress film, Suniel Shetty told Mumbai Mirror: "Everything is on hold for now. The film's team intends to make Hera Pheri 3, but some differences need to be ironed out. The film is a big hit on television as well as in the meme world and we are all aware of the anticipation among the audience for the film."

The first part, Hera Pheri, released in 2000, followed by a sequel Phir Hera Pheri in 2006. Even after a decade, Paresh Rawal, Akshay Kumar and Suniel Shetty roles of Babu Bhaiya, Raju and Shyam are still fondly recalled by many of us. The 2000 film also featured Tabu, Gulshan Grover, and Om Puri.

Recently, Hera Pheri competed 20 years on March 30 and on the occasion, Suniel Shetty shared two stills from the film and wrote: "20 years and the love keep pouring in... memories that will last a lifetime! #pareshji #herapheri."

20 years and the love keeps pouring in... memories that will last a lifetime! #pareshji #herapheri @akshaykumar

On the work front, Suniel Shetty was last seen in Darbar, which released earlier this year. The film starred Rajinikanth in the lead role. Suniel will next be seen in a couple of films such as Marakkar: Arabikadalinte Simham, Mosagallu and Mumbai Saga.