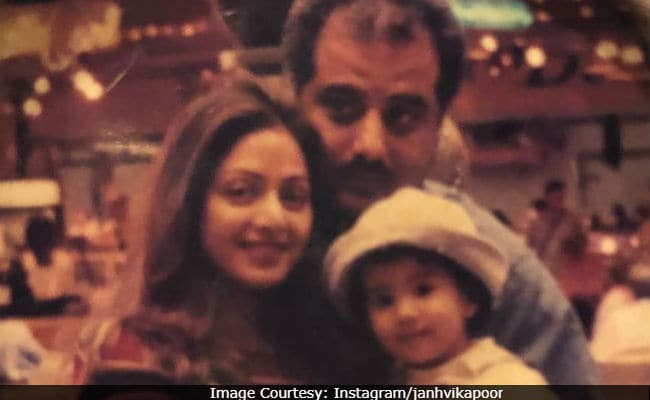 On Sridevi's birth anniversary, her daughter Janhvi shared a heartwarming picture with the late actress and dad Boney Kapoor. In the old picture, little Janhvi can be seen cradled in her mom's arms while Boney Kapoor stands behind them. Sridevi, who died last February in Dubai, would have been 55 today (August 13). Several celebrities like Priyanka Chopra, Varun Dhawan, Ananya Panday, Pakistani actress Mahira Khan have liked Janhvi's post, including her Sonam Kapoor and Anand Ahuja. Sridevi and filmmaker Boney Kapoor married in 1996. Janhvi, who made her Bollywood debut with Dhadak, is their elder daughter and Khushi is the younger child.

Sridevi died after drowning in her hotel on February 24. MOM was her last film as a lead actress. She had also shot for a cameo in Shah Rukh Khan's Zero, which is expected to release in December this year. Sridevi started her career as a child artiste when she was just 4 and worked in 300 films.

Sridevi was honoured with her first ever National Award (posthumously) in April. She won Best Actress for her role in MOM. For the same film, she won the Best Actress prize at IIFA. At both the events, her award was collected by Boney Kapoor. Janhvi and Khushi had also accompanied him to the National Award ceremony in New Delhi.

She was the queen of grace and worthy of every praise. There's no doubt the award for Performance in a Leading Role - Female posthumously goes to the late #Sridevi#IIFA2018#NEXAIIFAAwardspic.twitter.com/x88ClJgR1d

For Sridevi, Janhvi, wrote a note addressed to her mom, which was attached to Dhadal's beginning.