"You would have been so proud... A star is born," Shabana Azmi wrote on Dhadak day 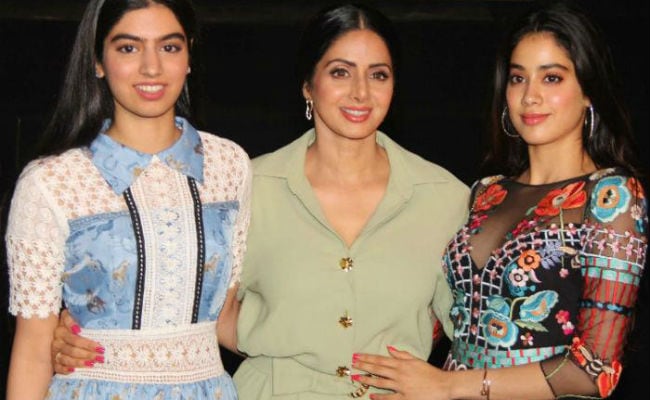 Janhvi just made her Bollywood debut with Dhadak

"Sridevi, wish you were here to watch your daughter Janvhi's debut," read a part of an emotional note that arrived on Shabana Azmi's Instagram on Friday. Janhvi Kapoor, Sridevi's elder daughter, just made her debut with Dhadak on Friday. A special screening of the film was hosted in Mumbai a day before release, of which Shabana Azmi and her husband Javed Akhtar were part of. Shabana Azmi was one of Sridevi's close friends, who appeared rather overwhelmed to have witnessed Janhvi on screen. Sharing a throwback photo of Sridevi, Ms Azmi also added: "You would have been so proud... A star is born." Janhvi Kapoor co-stars with Ishaan Khatter (Shahid Kapoor's brother) in the Shashank Khaitan-directed Dhadak, which is the Hindi remake of critically acclaimed Marathi blockbuster Sairat.

#Sridevi wish you were here to watch your daughter #Janvhi's debut. You would have been so proud .. A star is born

After Sridevi's tragic end in February this year, Shabana Azmi tweeted to announce that she Javed Akhtar were calling off the grand Holi party they host every year. Shabana Azmi and Javed Akhtar also attended Sridevi's last rites and paid their respects hours before Sridevi was cremated with state honours in Mumbai.

Janhvi Kapoor, who continued shooting for Dhadak after Sridevi's death in February, has dedicated her debut movie to the late actress. A note written by Janhvi has been attached to the film, a source told BollywoodLife ahead of the film's release: "Janhvi has written a heartfelt note to Sridevi which has been attached in the very beginning of the film, along with their picture. She wanted to dedicate her first film to her mother and it was only obvious for the makers to include this special tribute in the film."

Janhvi often spoke about Sridevi during the promotions of Dhadak and said Sridevi was extremely supporting but never really interfered with the way Janhvi was shaping herself as an actress. "She supported me a lot but I think both of us were clear that she wanted this to be my own journey. I remember reading lines with her around. But she never said 'Do it like this or that'. She would always say, 'I want you to find this on your own, do it on your own'," news agency PTI quoted Janhvi as saying.

Meanwhile, on the day of Dhadak's release, Janhvi has also been welcomed in Bollywood by celebrities like Rishi Kapoor and Dia Mirza among others. Performances of the Dhadak duo have also been appreciated by Janhvi's brother Arjun Kapoor, Madhuri Dixit and Neha Dhupia and others.