For Janhvi Kapoor And Dhadak, Tweets From 'Proud' Brother Arjun And Other Celebs 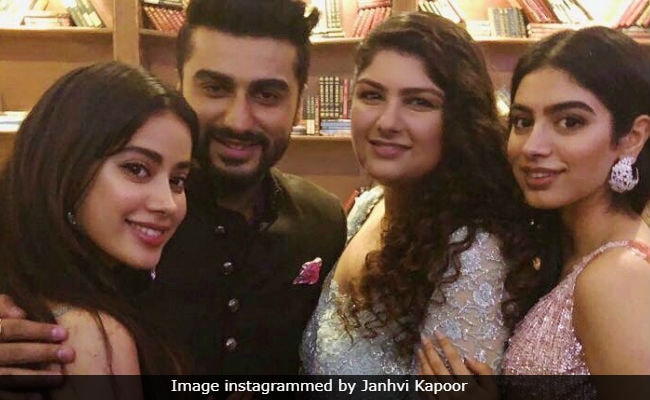 Janhvi Kapoor and Ishaan Khatter's Dhadak is out in theatres and several celebrities, including members from Janhvi and Ishaan's families, watched the film before everyone else at one of film's special screenings. Janhvi's brother Arjun Kapoor wasn't spotted at any of the screenings held last week but from his tweet it appears, Arjun has watched the film and he's "bloody proud" of his little sister. "It's out today Dhadak. Shashank Khaitan (director) has made a heart-warming and yet gut wrenching love story. He's handled the two of them so deftly. Ishaan, you have nailed the simplicity and energy of a young kid who just sees purity in love. Janhvi, you left me speechless. So bloody proud of you," he tweeted.

It's out today #Dhadak !!! @ShashankKhaitan has made a heart warming & yet gut wrenching love story....he's handled the 2 Of them so deftly. Ishan u have nailed the simplicity & energy of a young kid who just sees purity in love Janhvi u left me speechless so bloody proud of u...

The makers of Dhadak organised several screenings in the week preceding the film's release. On Wednesday, team Dhadak invited celebs such as Madhuri Dixit, Rekha, filmmaker Ashutosh Gowariker and others, who've reviewed the film on Twitter. "Dhadak is so beautiful yet an intense film... Ishaan and Janhvi, I'm sure you will win over everyone with your wonderful performances," Madhuri tweeted. Lagaan director Ashutosh Gowariker was also awestruck by Janhvi and Ishaan's performances and wrote: "Janhvi Kapoor is so immensely watchable. She surprised me with her endearing performance. Ishaan Khatter is a completely energetic actor."

ENJOYED #Dhadak !!#JanhviKapoor is so immensely watchable! She surprised me with her ENDEARING performance! @imIshaanKhatter is a completely ENERGETIC actor!@AjayAtulOnline 's title track is on LOOP!
CONGRATS @karanjohar@ShashankKhaitan for yet another BO success! pic.twitter.com/0Rj6ziBkUr

Bollywoodwallahs are super excited for Janhvi's official entry to the film industry. Janhvi, daughter of late actress Sridevi and filmmaker Boney Kapoor, has enjoyed celebrity status even before her first film was announced. But today onwards, Janhvi is a bona fide member of the film fraternity and industry veterans such as Rishi Kapoor and Dia Mirza, welcomed her and Ishaan with open arms.

"My blessings to the young, magnificent and daunting couple - Janhvi and Ishaan, for their maiden venture Dhadak. You are on the threshold of a bright and a long career. May you both sway the audiences off their feet. God Bless," he tweeted.

Here are some tweets for Janhvi and Ishaan's welcome:

My blessings to the young,magnificent and daunting couple-Janhavi and Ishaan, for their maiden venture "Dhadak" You are on the threshold of a bright and a long career! May you both sway the audiences off their feet. God Bless!

All my love and good wishes to @ShashankKhaitan#Jahnvi and #Ishaan for #Dhadak! Win hearts! Welcome to the movies, your energy is electric So sorry I missed tonight's screening. Can't wait to watch when I return! @apoorvamehta18@karanjohar

Dhadak is a remake of Marathi film Sairat and it is produced by Karan Johar and directed by Shashank Kahitan. The film also stars Ashutosh Rana.