Janhvi Kapoor On Coping With Sridevi's Death: "Work Was Easy, Everything Else Was Struggle"

Janhvi recently Instagrammed a picture of herself, for which she was told "Sridevi lives through her" 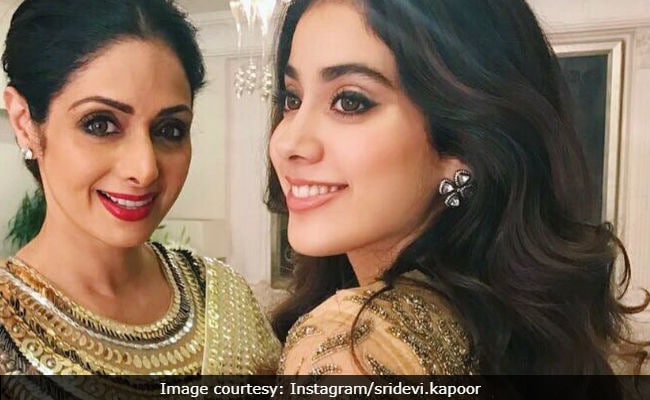 A file photo of Sridevi with her daughter Janhvi. (Image courtesy: Instagram)

Janhvi Kapoor returned to the sets of Dhadak a few weeks after her mother Sridevi's funeral and now just days before the release of her debut film, the 21-year-old actress told Mumbai Mirror that it was an "organic decision." She said: "Surprisingly, the only thing I don't associate with work is mom. Both of us had consciously decided that this would be my own journey. Acting is the only thing I knew to do without her." Speaking about coping with her mother's death, Janhvi said: "Working was the easy part, everything else was a struggle." Janhvi's debut film will open in theatres on July 20.

Promoted
Listen to the latest songs, only on JioSaavn.com
Recently Janhvi Instagrammed a picture of herself from the promotions of the film, for which she was told by the Internet that "Sridevi lives through her." Speaking about dealing with the comparisons with her late mother, Janhvi said: "Hopefully I'm worthy enough to be given the chance to create my own identity."

Janhvi is Sridevi and Boney Kapoor's elder daughter and her sister Khushi recently completed her school. Boney Kapoor was married to Mona Shourie and their children are Arjun Kapoor (also an actor) and Anshula. In May, Karan Johar interviewed Janhvi for Vogue magazine, in which he said that after Sridevi's death "the family has actually come together."

Speaking about brother Arjun Kapoor, Janhvi told Mumbai Mirror: "I've realised Arjun is very wise, just like dad. They can comfort and guide you in a way that many people can't. Everyone has always said such nice things about him and the way he's been brought up. He values honesty and tells me to be respectful towards people."

Dhadak is produce by Karan Johar and directed by Shashank Khaitan. The film also stars Ishan Khatter and Ashutosh Rana.