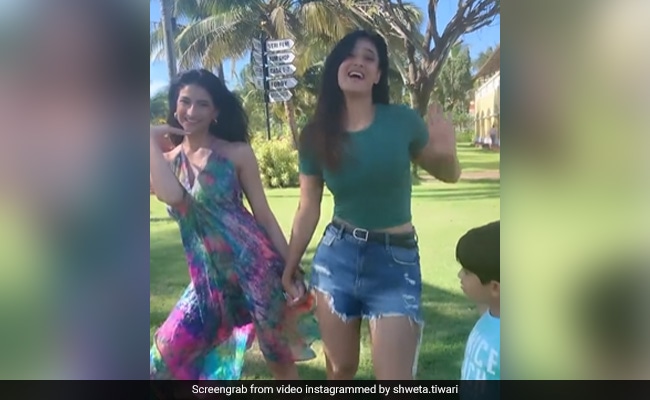 Shweta Tiwari and her daughter Palak celebrated their birthdays, respectively, last week and the actress gave us a glimpse of their birthday celebrations on Saturday. Shweta posted video of herself dancing with her daughter on a lawn as the actress' son Reyansh watches them adorably. Shweta Tiwari looks stunning in a green top and denim shorts while Palak can be seen sporting a multicoloured dress. "B'day dance with my Princess Palak," the actress captioned the video. However, Shweta Tiwari's friends from television industry and her fans think that the actress looks so young in the video that it looks like Palak is dancing with her "sister" in it.

"OMG sisters," actress Srishty Rode commented while Sangeeta Bijlani wrote: "You both are too adorable."

Fans also dropped comments like "aap toh mumma lag hi nahi rahe Palak ke" and "looking like sisters" for Shweta Tiwari on her post. One user wrote: "OMG. Who is daughter and who is mother. Really confused."

See the aforementioned video of Shweta Tiwari dancing with her daughter Palak here:

Palak is Shweta Tiwari's daughter with her first husband Raja Chaudhary. The actress has a son named Reyansh with estranged husband Abhinav Kohli.

In terms of work, Shweta Tiwari is best-known for playing the role of Prerna Basu in the first installment of Ekta Kapoor's popular daily soap Kasautii Zindagii Kay. She participated in the TV reality show Bigg Boss 4 and she was the winner of the season. She also starred recently in the TV show Mere Dad Ki Dulhan.