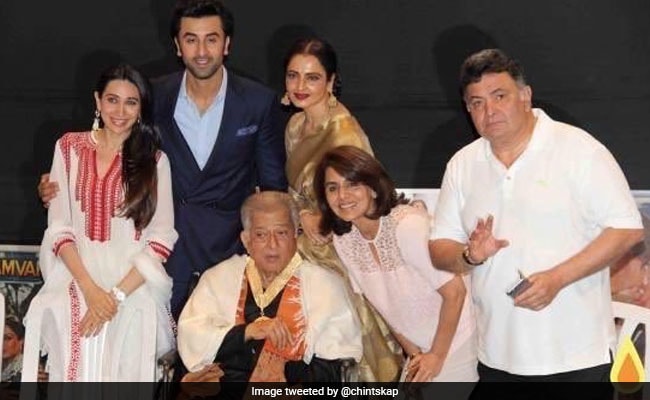 What a proud moment for the Shashi Kapoor family ! Dada Sahab Phalke award for him. Third Phalke Award in the family! Happy Birthday uncle! pic.twitter.com/0et8LUVM4e

In the other photo, Shashi Kapoor can be seen surrounded by grand-nephew Ranbir (Rishi Kapoor's son), grand-niece Karisma Kapoor (Randhir Kapoor's daughter) and also Rishi and Neetu Kapoor. Rekha, who co-starred with the acting legend in films like Baseraa and Utsav, also joined the Kapoors in the photo. Neetu Singh co-starred opposite Shashi Kapoor in Deewar before she married Rishi Kapoor in 1980.

Amitabh Bachchan, who famously co-starred with Shashi Kapoor in films such as Deewar, Namak Halal and Kabhi Kabhie, spoke at the ceremony. On Monday, this is how he remembered Shashi Kapoor. Big B also paid tribute to four-time Goa Chief Minister and former defence Minister Manohar Parrikar, who died on Sunday.

The event at Prithvi Theatre may have been a close-knit one but it was not without Shashi Kapoor's former heroines joining him to celebrate his honour. The likes of Waheeda Rahman, Asha Parekh, Zeenat Aman, Shabana Azmi, Nafisa Ali and Supriya Pathak were in attendance.

And his heroines! WOW pic.twitter.com/EmnyOvxtYS

Shashiji .. we miss you.. your warmth your generosity your humanity .. Today would have been your 81st birthday .. pic.twitter.com/YR6ZldG1KT