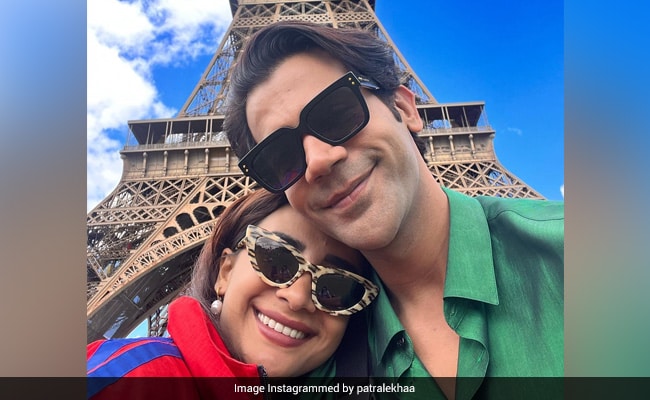 Patralekhaa and husband Rajkummar Rao  are holidaying in Paris and what good is a Paris vacation without a visit to the Eiffel Tower? So the star couple shared an adorable picture of themselves, in which we got a glimpse of the Eiffel Tower in the backdrop. Patralekhaa captioned the post: "Us" and added a heart emoji. In the comments section, Arjun Kapoor wrote: "Arre yeh location jaani pehchani hai (this location looks very familiar)." Arjun's comment, replete with humour, was with reference to his latest Parisian holiday with Malaika Arora. Arjun celebrated his 37th birthday in the city of love.

This is what Patralekhaa posted:

About Arjun Kapoor's comment, the actor was holidaying in Paris too a few days ago, along with girlfriend Malaika Arora. Arjun Kapoor and Malaika Arora also shared pictures from their Parisian vacation and the Ek Villain Returns actor captioned them: "Eiffel good... I knew I would..."

Patralekhaa and Rajkummar dated for over 11 years before getting married in Chandigarh last year. They co-starred in the film CityLights. The actress made her debut in Bollywood opposite Rajkummar Rao in the film CityLights. The actress has also starred in films such as Love Games, Badnaam Gali and Nanu Ki Jaanu, to name a few.

Rajkummar Rao stepped into the film industry with Love, Sex Aur Dhokha. His breakout role was in the 2013 film Kai Po Che! Rajkummar has also featured in critically-acclaimed films like CityLights, Shahid, Omerta, Newton and Aligarh. The actor recently starred in Hum Do Hamare Do and Badhaai Do. His upcoming projects include Hit and Monica, O My Darling.