"Rule #1: Life is supposed to be fun," wrote Lauren Gottlieb 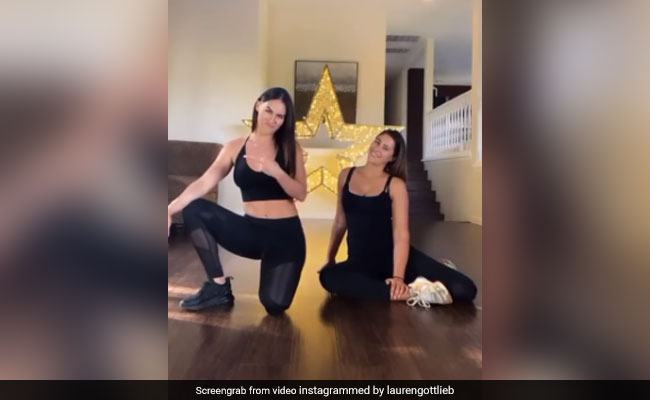 Lauren and Nargis in a still from the video. (courtesy laurengottlieb)

ABCD actress Lauren Gottlieb found a new workout partner in the form of Rockstar actress Nargis Fakhri. Lauren shared a snippet from their routine, which was a mix of dance, aerobics and a whole lot of fun. In the video, the actresses, twinning in black athleisure, can be seen goofing around. Lauren Gottlieb wrote in her caption, "Rule #1: Life is supposed to be fun." Tagging Nargis Fakhri, she wrote: "We laughed for like 10 min after this." Varun Dhawan, who co-starred with Lauren Gottlieb in ABCD 2 and worked with Nargis Fakhri in Main Tera Hero and Dishoom, commented on the post. He wrote: "Nargis holding her laughter in throughout this entire routine."

Rule #1: Life is supposed to be FUN @nargisfakhri we laughed for like 10 min after this!

Lauren Gottlieb made her Bollywood debut with the dance-based film ABCD - Any Body Can Dance. She also featured in the second installment of the film titled ABCD 2. She was also a part of Welcome 2 Karachi, which featured Arshad Warsi and Jackky Bhagnani. She was also a participant in TV reality shows So You Think You Can Dance and Jhalak Dikhhla Jaa 6. Lauren also appeared in the music video She Dance Like.

Nargis Fakhri stepped into Bollywood with Imtiaz Ali's 2011 film Rockstar, in which she co-starred with Ranbir Kapoor. She has been a part of films like Madras Cafe, Main Tera Hero, Azhar, Housefull 3, Banjo and 5 Weddings. Nargis was last seen in 2019 horror thriller Amavas.

Varun Dhawan was last seen in Street Dancer 3D, which also starred Shraddha Kapoor and Nora Fatehi. The actor will next be seen in Coolie No 1 remake, which has been directed by his father David Dhawan and stars Sara Ali Khan.