On Moving In With Malaika, Arjun Kapoor, Arbaaz Khan Were Mentioned. What The Actress Said

"Nobody knows that. I proposed. It was not Arbaaz who proposed to me," Malaika revealed during the show 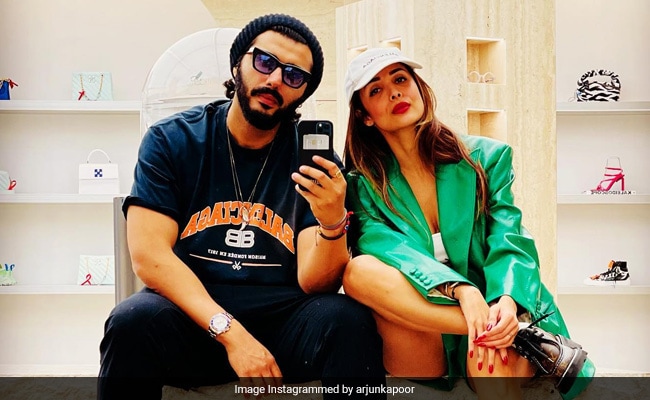 When Farah Khan asked Malaika Arora about her thoughts on marriage and kids, the actress said, "I don't know what the future holds for me." She added, "These are things, which of course, you discuss with your partner. I don't feel insecure. Just because I have been through a divorce or something, I am not bitter. I have a lot to feel and I think I have a better person in a relationship. Whatever choices or decisions I made, I made purely and at the end of the day, this man (referring to boyfriend Arjun Kapoor) in my life makes me happy. Whatever else the world says, whatever they feel, I don't care."

Malaika Arora, who was previously married to actor and film producer Arbaaz Khan, revealed that she was the one who proposed. "I got married very early, very young. I wanted to get married because I just wanted to get out of the house, Farah. Believe it or not Farah, I'm the one who proposed. Nobody knows that. I proposed. It was not Arbaaz who proposed to me. It was the other way around. I actually said, you know what, I want to get married, are you ready? And very sweetly actually he just turned around and told me, 'You pick the day and the place'. He said that," recalled Malaika.

Malaika Arora also talked about divorce with Arbaaz Khan and said, "We drifted. We were too young. I was very young. I think I also changed. I also wanted different things in life. Somewhere I felt that was missing in my space and I needed to move on. I felt the only way I could do that is if I could actually probably let go of certain ties. I think today we are better people. We love and respect each other for the people that we are. We have a child together. So that is something that will never ever change. But I feel we are far better people. Then, I think we were very irritable. Very irritable people. We became angry, negative people." Farah Khan added, "Towards the end. Till Dabangg you all were fine. Then I also saw the difference."

Malaika Arora also revealed that after her car accident earlier this year, Arbaaz Khan was the first person she saw. "When I was wheeled out one of the first faces that I saw was actually Arbaaz, at that moment," said Malaika Arora.

Malaika Arora and Arbaaz Khan were married for 19 years and they got divorced in 2017. Arbaaz and Malaika are parents to 20-year-old son named Arhaan. He went abroad for higher studies last year. Arbaaz Khan is currently rumoured to be dating model Giorgia Andriani.