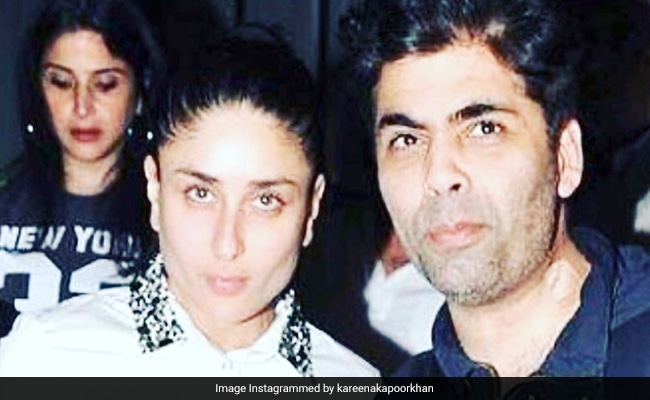 If there is one thing Karan Johar is known for, apart from his movies and talk shows, it is his legendary friendships. The filmmaker is friends with all the big names in not just Bollywood but also film industries across the country. Age and language appear to be no barriers for the director, who rubs shoulders with the superstars of the cinema world- young and old. While he may have several friends, if there is one actress who can claim to be closest to him, it is Kareena Kapoor. And on his 50th birthday, bestie Kareena Kapoor has the sweetest note for the director along with a picture of the duo in which they are– yes, you guessed it right – pouting their heart away.

In the candid image shared, while Kareena Kapoor seems to be pouting by holding her cheeks in, Karan Johar appears to be in between conversations. We also spotted Fabulous Lives Of Bollywood Wives star Maheep Kapoor in the background.

“I don't know, are we pouting? Sucking our cheeks in. Well, what the hell. It's us, you and me, me and you..forever. A love like no other. Let's dance tonite like never before …cause it's my sweetheart's birthday. Happy 50, Karan Johar. No one like you,” Kareena Kapoor wrote in the caption.

Replying to the post, designer Manish Malhotra, who is a common friend of Kareena Kapoor and Karan Johar wrote, “Karan Bebo,” with heart emojis.

Here are some other images of the besties:

Both Kareena Kapoor and Karan Johar have confessed that they are each other's favourites, several times in the past. But this does not mean the friendship has always been smooth sailing. In fact, quite early in her career, Kareena Kapoor had a major falling out with Karan Johar over one of his most celebrated projects, Kal Ho Naa Ho.

And this is no conjecture – one of Karan Johar's favourite words to use on Koffee With Karan. In fact, the 2002 rift was also mentioned by the filmmaker in his autobiography An Unsuitable Boy. In it, he writes, “She (Kareena Kapoor) asked for too much money and we had some kind of a fallout at that time." Karan Johar had initially offered the role of Naina in the film to Kareena. The part was eventually played by Preity Zinta.  This was after Kareena played Poo – one of her most iconic roles – in  Karan's Kabhi Khushi Kabhie Gham.

Kareena Kapoor reportedly asked for a salary equal to that of Shah Rukh Khan, one of the film's two heroes and her senior in the industry by over a decade. In the book, Karan shares, “The weekend of Mujhse Dosti Karoge's release, I offered her Kal Ho Naa Ho, and she asked for the same (amount of) money that Shah Rukh Khan was getting. I said, 'Sorry'. I was very hurt. I told my father, 'Leave that negotiation room' and I called her. She didn't take my call, and I said, 'We're not taking her. And signed Preity Zinta instead.”

As a result, Kareena Kapoor and Karan Johar did not speak to each other for almost a year. “For a year, we looked through each other at parties. It was very idiotic. She was a kid; she's a decade younger than me,” he writes in the book.

The director adds that it was his father, director Yash Johar's cancer diagnosis that brought the friends back together, with Kareena Kapoor calling Karan Johar on hearing the news and breaking down. Following the brief spat, Kareena Kapoor even appeared on Koffee With Karan and apologized for her part in the tiff. "I know I wronged a friend," she said in the first season of the show when she appeared with Rani Mukerji.

Since then the friendship has only gone from strength to strength with Kareena Kapoor starring in several Dharma Productions' films over the years such as Kurbaan, We Are Family, Ek Main Aur Ekk Tu and Good Newwz.

B Praak's Newborn Baby Dies At The Time Of Birth, Singer Shares An Emotional Note