On Kajol's Birthday, Manish Malhotra Shares His "Favourite" Song Of The Actress

"So many movies, songs, outdoors together and years of work, friendship and love," wrote Manish Malhotra 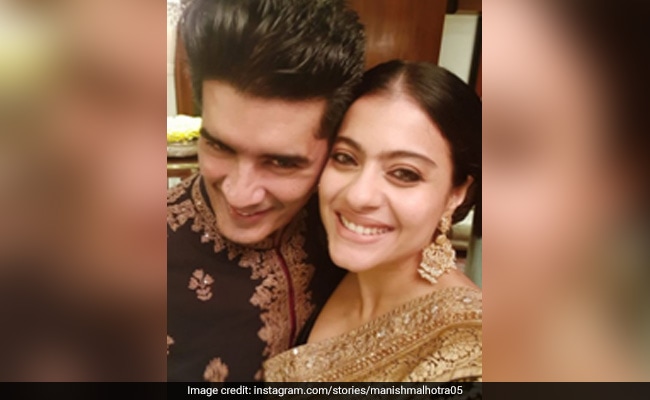 It's Kajol's birthday and her close friend and fashion designer Manish Malhotra wouldn't have missed wishing her and so he did in his own style. The designer, on Wednesday afternoon, posted a snippet from his "favourite" song, featuring birthday girl Kajol and her co-star Shah Rukh Khan. The song we are talking about is Suraj Hua Maddham from Karan Johar's 2001 film Kabhi Khushi Kabhie Gham.... Manish Malhotra, who also designed Kajol's outfit for the song as well as the film, wrote in his caption: "My absolute favourite and truly the best, Kajol. Happy birthday. Lots of love. So many movies, songs, outdoors together and years of work, friendship and love. My favourite song of Kajol."

My absolute favourite and truly the best @kajol happy birthday lots of love so many movies , songs , outdoors together and years of work,friendship and love #kajol #love and my most favourite song of Kajol .

For Kajol, Manish Malhotra also posted an Instagram story, responding to which, the Helicopter Eela actress wrote: "Thank you darling, miss you." Kajol, who swears by Manish Malhotra's designs, has been styled by him in many of her films, which include Dilwale Dulhania Le Jayenge, Kuch Kuch Hota Hai, Kabhi Khushi Kabhie Gham..., Fanaa, My Name Is Khan, We Are Family, Dil Kya Kare, Yeh Dillagi and Gupt: The Hidden Truth. The actress is frequently seen opting for his creations on red carpet events as well.

Kajol's next project is the Netflix film Tribhanga, which will mark her digital debut. Produced by Ajay Devgn, Tribhanga will be directed by Renuka Sahane and it will also star Tanvi Azmi and Mithila Palkar. The actress was last seen in Priyanka Banerjee's short film Devi. She was also a part of the period drama Tanhaji: The Unsung Warrior, in which she played the role of warrior Tanhaji Malusare's wife Savitribai Malusare. Ajay Devgn played the titular role in the film, while Saif Ali Khan featured as the antagonist.