On It, Janhvi Kapoor: BRB, Finding The "Exceptions" You Asked For 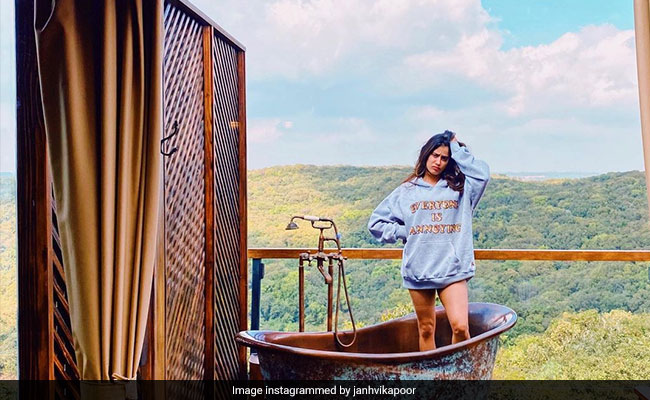 Janhvi Kapoor's latest Instagram entry is a whole mood in itself. To begin with, the actress can be seen posing at a stunning location. Lush green hills in the backdrop - check. Bath tub - check. Sass - check. Oh, we totally forgot about her t-shirt which made quite a statement. In the picture, which appears to be from a photoshoot of sorts, the actress can be seen dressed in a t-shirt, the text on which reads, "Everyone is annoying." Her expression says it all. The Dhadak actress accompanied the post with a caption that read, "Lmk if you find any exceptions." Janhvi's fans might not have found the so-called "exceptions" she asked for but what they did find was a stash of heart emojis that filled up the comments section of her post.

Without much ado, take a look at Janhvi Kapoor's post here:

The many moods of Janhvi Kapoor, summed up in some stunning shots. Take a look already:

Last year, Janhvi Kapoor was seen in Gunjan Saxena: The Kargil Girl, which released on streaming platform Netflix. This year, she starred in Roohi, opposite Rajkummar Rao and Varun Sharma. Janhvi Kapoor stepped into Bollywood with the 2018 film Dhadak. She was also a part of Netflix's Ghost Stories. The actress' line-up of film includes comedy Dostana 2, co-starring Kartik Aaryan. She will also be seen in Good Luck Jerry.