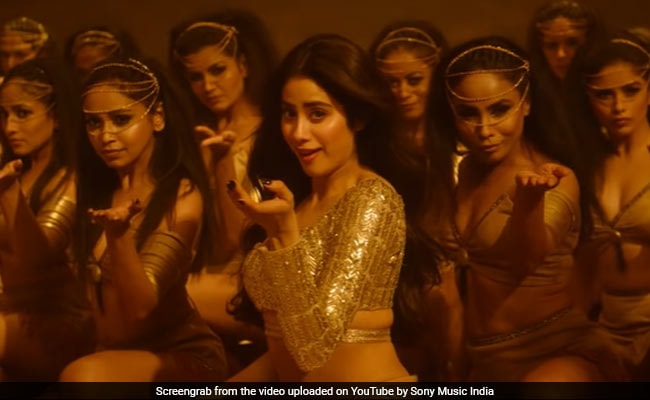 Actor Janhvi Kapoor sets the screen ablaze in new party song Nadiyon Paar from her upcoming horror-comedy Roohi. The makers of Roohi dropped the song on the Internet on Wednesday, following which Janhvi also shared a short clip from the track on Instagram. The new peppy number is a remix version of the popular Punjabi classic Let The Music Play. The original song was composed by musician Shamur and was released back in 2008. The foot-tapping music is not the only wow factor of Nadiyon Paar as Janhvi Kapoor's dance moves make the music video all the more enjoyable for her fans. The Dhadak actor can be seen grooving in a stunning gold outfit in the song. Sharing a BTS video from the shooting of the song on Instagram, Janhvi thanked fashion designer Manish Malhotra for creating the shimmery outfit for her. "Golden, Manish Malhotra, can't thank you enough for this outfit," she wrote in the caption.

Take a look at Nadiyon Paar from Roohi here:

Nadiyon Paar or Let the Music Play Again has been composed by Sachin-Jigar while Shamur, Rashmeet Kaur, and IP Singh have sung it. Sachin-Jigar have also sung few sections of the song.

The track is the third song from the horror comedy. The makers had earlier dropped party track Panghat and romantic number Kiston on the Internet. Besides Janhvi, the film also stars actors Rajkummar Rao and Varun Sharma. Roohi has been directed by Hardik Mehta, while Dinesh Vijan's Maddock Films has produced it. The horror comedy revolves around the story of a ghost who abducts and possesses brides on the night of their marriages.

Roohi will release on March 11 in cinemas.