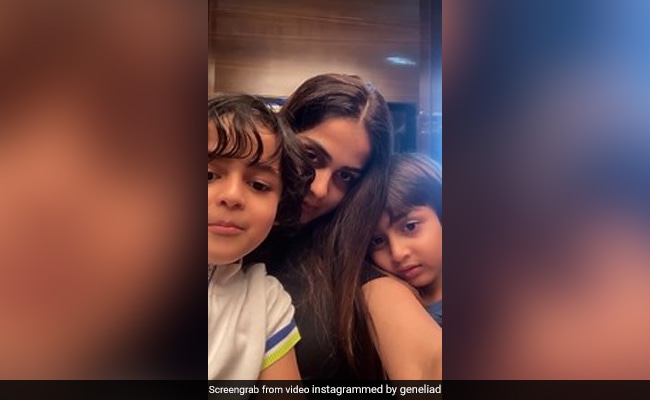 A still from a reel Genelia D'Souza posted. (courtesy geneliad )

Genelia D'Souza's Instagram game has always been on fleek. Be it playing the part of a disgruntled girlfriend waiting for her boyfriend to message or lip-syncing funny lines to make them look like a regular conversation, the 33-year-old actress often churns out engaging content. In her latest Instagram Reels, Genelia shared the joys of being a mother, and states, "Nothing in life will ever make you feel as happy, as sad, as exhausted but most importantly as incredibly proud as motherhood." In the video, her sons, Riaan and Rahyl, too, are seen having a gala time with their mother.

Genelia goes on to add in the caption, "Covid has been tough but kids just make you believe there's magic because they search for it." Wearing a black tee with her hair left open, the actress is seen jumping around the bed with her sons, while also lip-syncing to the song Dilemma by American rapper Nelly and singer Kelly Rowland.

The video grabbed the Internet's attention in no time. Her husband, actor Riteish Deshmukh was among the first ones to comment. He wrote, "Most adorable reel," followed by three heart emojis. Actresses Kanchi Kaul and Samita Bangargi, too, commented on the adorable post with heart emojis.

A few days ago, on the occasion of Gudi Padwa, Genelia posted a few words of wisdom while wishing her fans. She had written then, "Tough times shouldn't dampen the spirit. If this year has taught us anything, it's all about spending time with your loved ones and finding ways to make it special." She had also posted a video with Riteish and her lip-syncing to the popular track Kya khoob lagti ho from the 1975 film Dharmatma while getting their make-up done.

Genelia's Instagram posts are quite popular. Riteish, often, joins her in these videos. The couple got married in 2012. They have worked together in movies such as Masti and Tere Naal Love Hogaya.