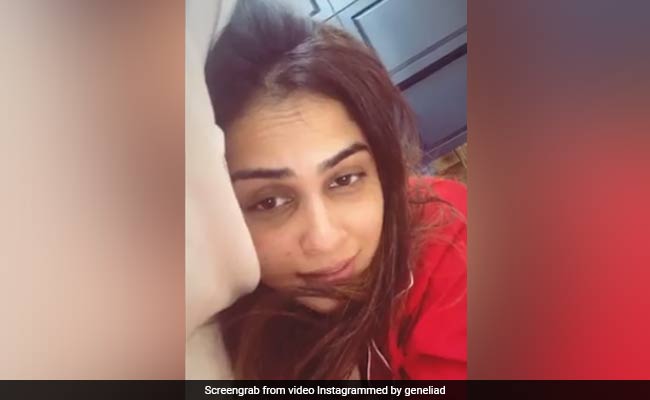 One cannot help but fall in love with actress Genelia D'Souza. Don't believe us? Take a look at the actress' latest Instagram video. A fresh-faced Genelia can be seen mouthing some fun lines before she breaks into a lovely smile. The actress is lip-syncing to a TikTok dialogue, “Acha, mohabbat hogayi hai? Humse ho gayi hai?...Acha, baat suno, pasand buri nahi tumhari. (You have fallen in love? Fallen in love with me?... Wait up, listen, your choice is not bad, after all).” Cuteness overload, isn't it?

Genelia's husband Riteish Deshmukh appeared smitten by the actress, just like the rest of us. Leaving a sweet comment that had fans gushing, he wrote, “Am I lucky or am I lucky?” followed by heart emojis. Replying to the comment, Genelia wrote, “You are the luckiest,” adding a flurry of emojis. Fans also reacted to Riteish's comment, calling them a lovely couple. One of the users wrote, “Definitely, the best choice you have ever made.”

After watching the video, actor Sanjay Kapoor also joined several fans in asking Genelia to return to films. He wrote, “You should start doing films again.” To this, Genelia replied, “So sweet you are Sanjay. Now, I am rooting for our baby, Shanaya.” Shanaya Kapoor is Sanjay's daughter. She is expected to start shooting for her debut film in July with Dharma Productions.

Genelia and Riteish have worked together in movies such as Masti and Tere Naal Love Hogaya before tying the knot in 2012. The couple has two sons, Riaan and Rahyl.