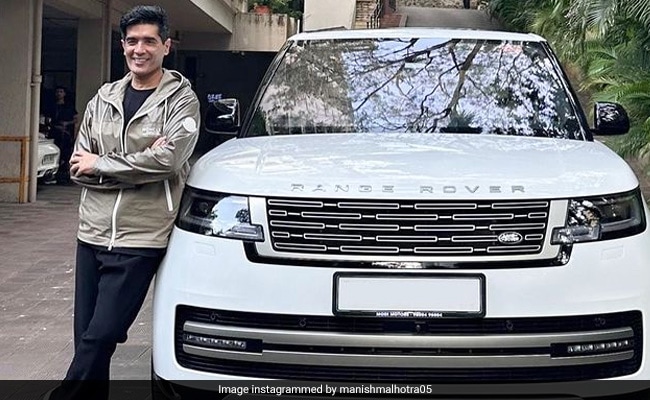 Manish Malhotra became a proud owner of a new Range Rover this Dussehra. The ace designer has shared some pictures of the swanky white SUV on Instagram. Along with the pics, he wrote, “Auspicious day” and added a Sun emoji. Actress Sara Ali Khan was among the first to drop a comment under the post. Sara has picked a bunch of dollar faces, red hearts and folded hands emojis to express her excitement. Singer Sophie Choudry followed suit. Pointing at the picture that features Manish Malhotra behind the wheels, close friend and actress Kareena Kapoor asked, “Manu, you are in the driver's seat?” Veteran actress Shabana Azmi, too, didn't miss the chance to take a fun dig at the designer and wrote, “Such a middle-class boy”. She has also added a few ROFL emojis to the comment.

Filmmaker Punit Malhotra was dazzled by his uncle's new car. He wrote, “Woww” with a red heart icon.

Manish Malhotra has also shared a picture of himself sitting inside the Range Rover on Instagram Stories. Take a look:

The fashion designer has been busy working on friend and filmmaker Karan Johar's next directorial Rocky Aur Rani Ki Prem Kahani. The film stars Ranveer Singh and Alia Bhatt in the lead roles. Shabana Azmi, Jaya Bachchan and Dharmendra are also part of the project.

Manish Malhotra has worked with Shabana Azmi for her NGO Mijwan Welfare Society for quite some time now. The designer, earlier this year, celebrated the “10 years of Mijwan bond” and shared pictures and videos on Instagram. For the side note, he wrote, “Celebrating the people, purpose and progress to our 10 years of Mijwan bond. The overwhelming response to our Mijwan Couture Show just pushes my belief that hard work always gets its reward. The Mijwan girls have worked for two years on the intricate chikankari with our Design team. This Grand show wouldn't have been possible without the always passionate Shabana Azmi, who leads Mijwan Welfare Society.”

Manish Malhotra also made an appearance in the second season of the Netflix show Fabulous Lives of Bollywood Wives.