Inside Pics From Luv Ranjan And Alisha Vaid's Agra Wedding 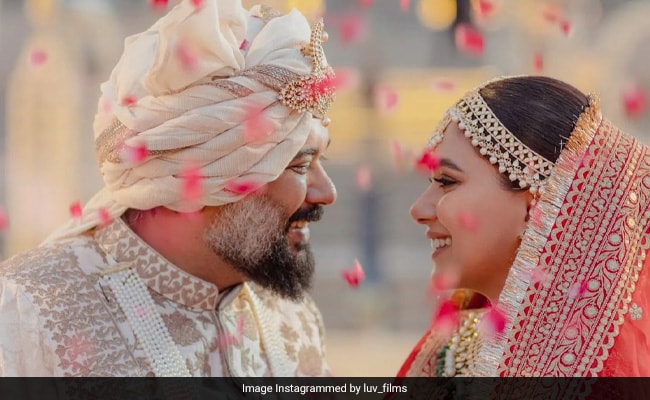 Filmmaker Luv Ranjan, who got married in Agra last month, shared pictures from his wedding festivities on his Instagram profile on Monday. The director wore a white and gold sherwani from the shelves of Manish Malhotra, while Alisha picked a red lehenga by Sabyasachi. Sharing a few moments from his destination wedding, Luv Ranjan wrote in his Instagram post: "As Alisha and Luv begin their new journey together, we seek your blessings and love." Later, several stars who attended the wedding shared moments from it.

Meanwhile, Arjun Kapoor, who was one of the attendees at the wedding, shared some inside pictures from the festivities. He captioned it: "Chalo abhi forever wala rishta confirmed hai. Congratulations to Luv and Alisha officially finally and also I can post whatever little we remember from our time in Agra." He added the hashtags #photodump, #yaarkishaadi and #foreverlove.

Actor Sunny Singh, who featured in Luv Ranjan's films Pyaar Ka Punchnama 2 and Sonu Ke Titu Ki Sweety, wrote this while sharing the pictures: "So happy to celebrate this day with you both! Wishing you lots of love and happiness and a fun filled future together. Bhaiya ans phabi."