Om Raut On Trolling Of Adipurush Teaser: "I Was Not Surprised"

"It's made for a larger screen and I can't consume it on a smaller screen," said Om Raut 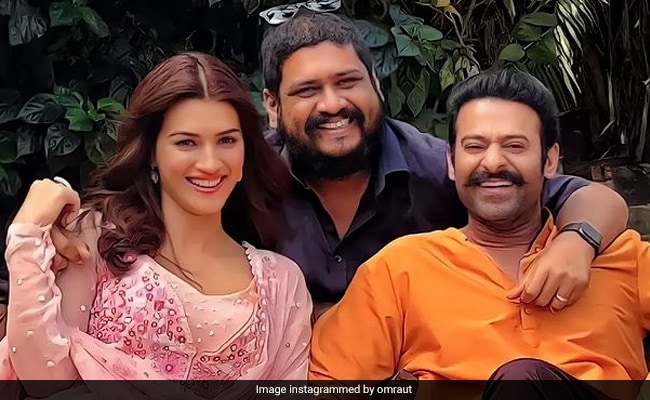 Team Adipurush, who released the film's first teaser on October 2 in Ayodhya, has been facing backlash from many on social media. From calling the teaser's VFX "poor" to "Sasta version of Game Of Thrones," social media users have been trolling it since the day of its release.. However, the makers, on Tuesday arranged a special 3D screening of the teaser in Mumbai. After the screening, during an interaction with the media, filmmaker Om Raut opened up about all the reactions he has been getting for the film's teaser and how he is not surprised as the film is made for the big screen and not mobile phones. He said that the film's VFX is too massive to be contained on cellphones and that the film's VFX, scale and treatment would look spectacular on the big screen, reported Indian Express.

Answering a question by the Indian Express, Om Raut said, "I was disheartened for sure, not surprised because the film is made for a larger medium-the big screen. You can cut it down to some extent but can't bring it down to a mobile phone. That's an environment I can't control. Given a choice, I'd never put it on YouTube but that's the need of the hour. We need to put it there so that it reaches a wide audience."

The filmmaker said that his film intends to bring people of all ages to theaters.

He said, "My partner and the studio (T-Series) is the largest YouTube channel in the world. This film does require an audience that comes to cinema halls very rarely- primarily the senior citizen generation that doesn't come to cinemas or people from remote locations who don't have access to theaters. We need those people to come and see the film because it's Ramayana."

He added, "We are doing it in this fashion so that it reaches the next generation which has lived on global content. We are trying to talk to them in their language, we want to reach them. That's why it has to be consumed in a particular way, in wider respect. We need to reach a wider audience and get them excited. So, as I said, I was not surprised because it's not made for smaller screen. It's made for a larger screen and I can't consume it on a smaller screen."

Om Raut's Adipurush, starring Prabhas, Saif Ali Khan, Kriti Sanon and Sunny Singh in the lead roles, is all set to hit the big screen on January 12 next year.

Om Raut's last film was Tanhaji: The Unsung Warrior, starring Ajay Devgn, which too was high on VFX and had earned over Rs 200 crore at the global box office.