Done With Denmark, Taapsee Pannu Is Now Holidaying In Cannes

Taapsee Pannu has added another lovely picture to her travel album 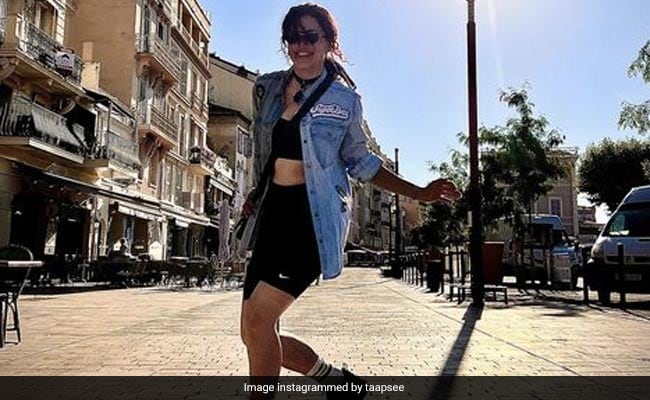 Taapsee Pannu is having a blast in Europe. We aren't saying this. Her lively Instagram timeline is. The actress was recently seen holidaying in Denmark. And, now, she has posted a photo with the hashtag "Cannes". What's her latest Instagram post about?  The actress calls herself a "happy traveller". Taapsee has dropped a frame where she is seen hopping on the pavement as she lets her hair over her face. Taapsee's charming smile is proof that she is enjoying her holiday to the fullest.  Her caption read, "Get set strut. "

Before this, Taapsee Pannu had dropped a picture in which she is happily jumping over a patch of green grass in Odense. Taapsee, dressed in an active wear with hair tied in a bun, is looking ready for her workout routine. Her caption clarified that she was up and about her fitness routine right in the morning. She captioned it, "Morning run to morning jumps. " She also used the hashtag, "Happy holidays."

Well, in the middle of this, Taapsee Pannu didn't forget to give us major desi vibes. She draped herself in a green saree for a “holiday party.”

Here's Taapsee Pannu's postcard from Copenhagen. Once again she posed outdoors on a sunny pavement and smiled for the camera.  She wore a dress and black boots. The caption gave her post a touch of wanderlust.  "Sunny side up," it read.

Taapsee Pannu's travel diaries are setting travel goals for all her fans. She will be next seen in Shabaash Mithu, a biopic on former India cricketer Mithali Raj. The trailer will be released on June 20. The film is directed by Srijit Mukherji.