Nothing To See Here, Just Priyanka Chopra Posing Like A "Queen" 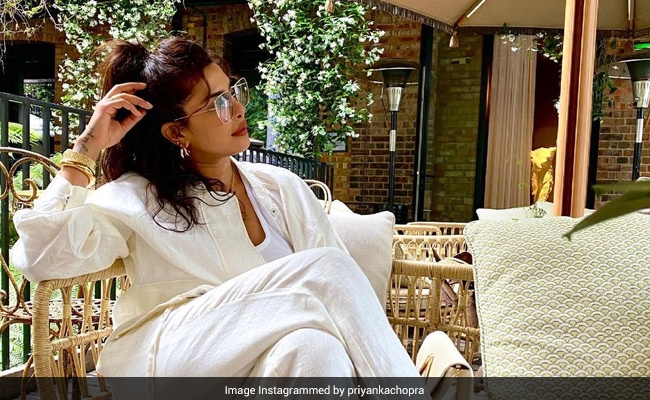 Priyanka Chopra sure is a stunner and there is no denying that she knows how to break the Internet with her fabulous pictures. The 38-year-old actress, who is currently in London, treated her fans to a brand new picture of herself. In the picture, the global icon can be seen exuding elegance as she poses like a "queen." She can be seen dressed in white from head-to-toe. Priyanka Chopra looks as stunning as ever as she poses sitting on her couch. We also get a glimpse of Priyanka's adorable dog paws tattoo in the picture. Keeping her caption simple, the actress just added a white heart and a peacock emoji. Priyanka also shared that the picture has been clicked by her stylish Divya Jyoti. Scores of fans commented on the actress' new post. While many left heart emojis, a fan called her "queen."

As mentioned above, Priyanka Chopra is currently in London, where her upcoming series Citadel is being shot. Earlier this week, she gave us a glimpse of her "quarantine life" in London. Priyanka dropped a picture of herself and her pet pooch Diana on Instagram. "Reunion #quarantinelife," she wrote in the caption of the post.

In terms of work. Priyanka Chopra was last seen in Netflix's The White Tiger. She will next be seen in Russo Brothers' Citadel. She will also be seen in Matrix 4 and Text For You.