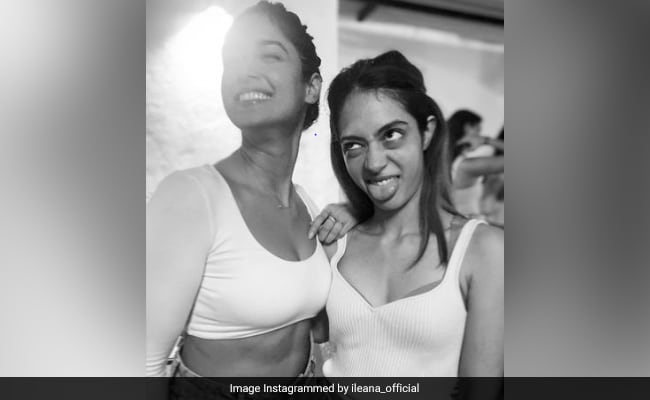 A quick glance through Ileana D'Cruz's Instagram timeline will surely lift up your mood today. The actress has posted a ROFL photo of herself and Never Kiss Your Best Friend star Anya Singh. The monochrome photo shows the duo making amusing faces while posing for the camera. Ileana, dressed in a crop top and jeans, is smiling with all her heart while Anya's expression will leave you in splits. She looks cool in a strappy top and denims. Sharing the photo, Ileana wrote, “Our last two brain cells trying to keep it together…and failing.” She had added an upside-down smiling face emoji to it.

Ileana D'Cruz's rib-tickling captions for her Instagram updates often crack her fans up. In the post, which was shared over the weekend, the actress hilariously wrote about dressing up “nice” just to “sit on the couch and order takeout.” Jokes apart, Ileana looks gorgeous in the selfie. Her caption read, “Some days I dress up nice, even if it's to just go sit on the couch and order takeout.”

Ileana D'Cruz is rumoured to be in a relationship with actress Katrina Kaif's brother Sebastian Laurent Michel. The reports about their rumoured relationship surfaced when Katrina shared photos from her birthday celebrations in the Maldives.

Ileana D'Cruz also shared some pictures from the getaway. For this particular group photo, she wrote, “Bet you can't tell what an amazing time we had. Also, why am I the only one not wearing sunglasses?”

Ileana D'Cruz will next be seen in Shirsha Guha Thakurta's Lovers. Her last project was The Big Bull, co-starring Abhishek Bachchan. The film was directed by Kookie Gulati and produced by Ajay Devgn. Meanwhile, Anya Singh was recently seen in the web series Kaun Banega Shikhar Vati.

Aamir Khan, Ex-Wife Kiran Rao And Son Azad Fly Out Of Mumbai Together