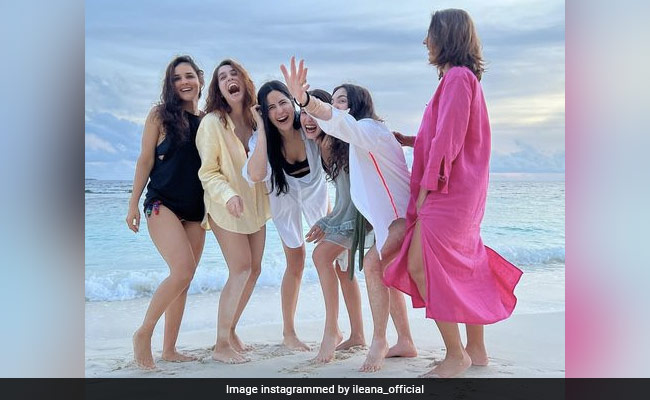 Katrina Kaif with her girl squad in the Maldives. (courtesy: ileana_official)

Katrina Kaif celebrated her 39th birthday last week in the company of her loved ones in the picturesque island country of the Maldives. On her first birthday after marriage, Katrina was whisked off for a grand celebration in the Maldives by her husband, Vicky Kaushal. The happy couple was joined by their friends including director Kabir Khan, Katrina's brother Sebastian Laurent Michel and Vicky's brother Sunny Kaushal. But it is Katrina Kaif's girl squad who has the Internet's attention and affection. The actress was joined by her sister Isabelle Kaif as well as friends Mini Mathur, Angira Dhar, Ileana D'Cruz, Sharvari and Karishma Kohli.

If you are curious about the wonderful women who added spunk and beauty to Katrina Kaif's island getaway, we have you covered.

Let's start with Isabelle Kaif. Katrina Kaif's sister Isabelle has followed her superstar sister's footsteps and joined the Hindi film industry. The actress is known for her work in films such as Suswagatam Khushamadeed and Time to Dance.

Actress Ileana D'Cruz's presence at the Maldivian birthday bash came as a pleasant surprise to many. However, soon reports surfaced that Ileana D'Cruz is reportedly dating Katrina Kaif's brother and model Sebastian Laurent Michel. As per a recent ETimes report Sebastian and Ileana have been in a relationship for about six months now. Ileana, who enjoyed a flourishing career in Telugu and Tamil films, made a memorable Bollywood debut with Barfi in 2012. She is known for her work in films such as Raid, Mubarakan and Rustom.

Mini Mathur is married to director Kabir Khan, who is a close friend and collaborator (Phantom, New York, Ek Tha Tiger) of Katrina Kaif. Kabir and Mini were also part of Katrina and Vicky's dreamy wedding last year. Mini has appeared as a host on a bunch of celebrated shows such as Indian Idol. She has also headlined the web series Mind the Malhotras.

Karishma Kohli, who is a close friend of Katrina Kaif, is the director of the web series Fame Game. Having assisted Kabir Khan for years, Karishma and Katrina have worked together on Ek Tha Tiger.

Sharvari, meanwhile, is dating Sunny Kaushal, Vicky's brother and shares a warm bond with Katrina Kaif. In fact, Katrina even included a photo of just Sharvari and her in the first birthday post she shared from the Maldives. Sharvari made her Bollywood debut with Yash Raj Films' Bunty Aur Babli 2 in 2021. Earlier she had appeared in Amazon Prime Video's web series The Forgotten Army - Azaadi Ke Liye alongside Sunny Kaushal. The series was directed by Kabir Khan.

On the work front, Katrina Kaif will be seen in Phone Bhoot with Ishaan Khatter and Siddhant Chaturvedi.