Nora Fatehi's Pics From Morocco Are Burning Up Instagram 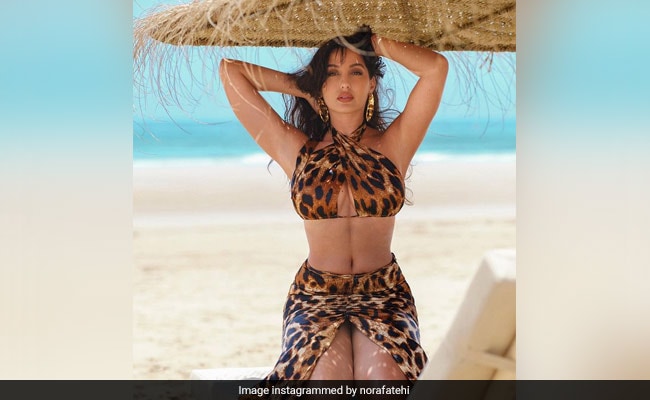 Nora Fatehi, on Thursday afternoon, posted a set of pictures from a beach setting on her Instagram profile. Going by her post, the pictures happen to be from Morocco. In the pictures, Nora  can be seen posing in an animal print bikini top of sorts, which she paired with a matching sarong and she looks every bit stunning. Her outfit was by the label Jenn and she accessorised it with earrings by Misho Designs. She captioned the post: "30 million. We on fiyaaa. Locomotion, we causing a comotion. Love you guys. Let's gooooo." The comments section of her post was filled up with fire and heart emojis from fans.

Nora Fatehi became popular with her dance performance to the song Dilbar from the film Satyamev Jayate. The track clocked in over 1 billion views on YouTube. She also starred in films like Street Dancer 3D, with Varun Dhawan and Shraddha Kapoor. She also featured in Salman Khan's Bharat. She will next appear in Satyameva Jayate 2, starring John Abraham and Divya Khosla Kumar. Nora will also be seen in Bhuj: The Pride Of India with Ajay Devgn, Sanjay Dutt and Sonakshi Sinha in prominent roles.