What Happens When Govinda Joins Nora Fatehi On The Dance Floor

Nora Fatehi, Ganesh Acharya and Govinda can be seen grooving to the tunes of the song Zaalima Coca Cola from the film Bhuj: The Pride Of India 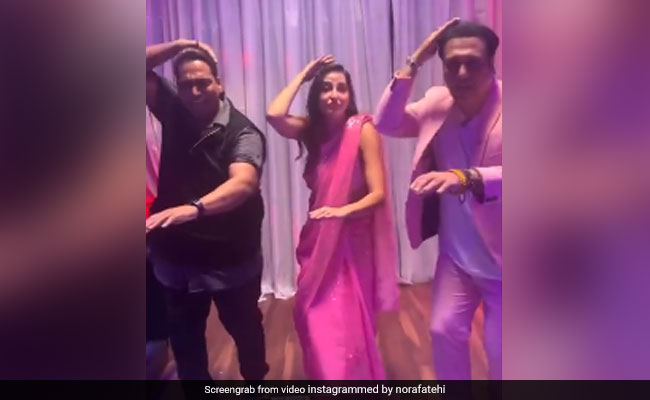 Nora Fatehi just made our dull Monday a little interesting and that too by simply doing what she does the best. Yes, you guessed it right. Nora Fatehi just dropped another power-packed dance video on Instagram, but this time she isn't dancing alone. The video features the 29-year-old actress grooving with the "legends themselves" - choreographer Ganesh Acharya and actor Govinda. The trio can be seen dancing to the tunes of the song Zaalima Coca Cola, which is from Nora Fatehi's upcoming movie Bhuj: The Pride Of India. Nora dropped the video as a run-up to the release of the song Zaalima Coca Cola. Through the video, the actress has launched the "hook step challenge." Sharing the video on Instagram, Nora Fatehi wrote: "While we wait for the official video to release... let's start the hook step challenge featuring the legends themselves Ganesh Acharya and Govinda. Full song out July 28th! Let's go."

Take a look at the video featuring the trio here:

As mentioned above, the song is from the film Bhuj: The Pride Of India. Besides Nora Fatehi, the movie also stars Ajay Devgn and Sonakshi Sinha. It is scheduled to release on Disney + Hotstar on August 11.

Coming back to Nora Fatehi and dancing, the actress sure has amazing dancing skills, and she often treats her fans to dance videos featuring herself.

Here are some of those videos straight from Nora's Instagram feed:

In terms of work, Nora Fatehi was last seen in the film Street Dancer 3D. Besides Bhuj: The Pride Of India, she will also be seen in Satyameva Jayate 2.