A Bikini Challenge With A Clickbait Twist, Courtesy Nora Fatehi

Nora Fatehi's bikini challenge video is not what you expected 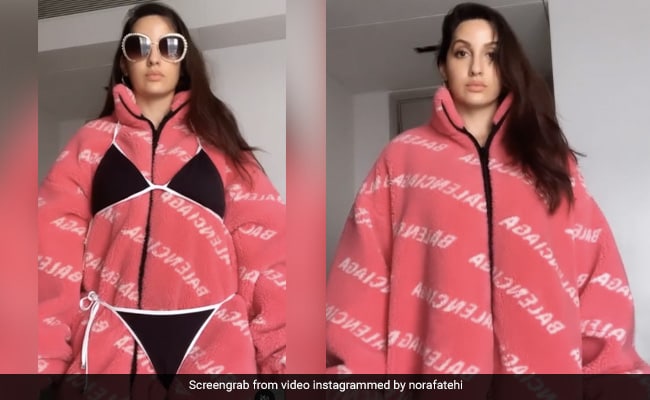 Nora Fatehi in still from her video (courtesy norafatehi)

Trust Nora Fatehi to turn any viral challenge into an ROFL one. Nora Fatehi, who is a brilliant dancer, recently signed up for an online challenge and made it her own. The challenge itself is pretty self-explanatory as it's called: "Show yourself in baggy clothes and then in a bikini." Nora Fatehi started the video with glimpses of herself in a baggy Balenciaga coat and then switched to her bikini avatar and it's probably not what you were expecting. "Showing myself in a bikini," Nora captioned her post, which garnered a lot of comments from her Instafam.

Varun Dhawan, who has co-starred with Nora Fatehi in Street Dancer 3D, dropped the LOL comment, which received over 2,000 'likes.' Rhea Kapoor also cheered for Nora Fatehi in the comments.

Nora Fatehi is also known for her signature sense of humour and often trends for adding hilarious twists to her videos. Here are some of them for a good laugh: "Available for bookings now," she captioned a video of her karaoke session.

In terms of work, Nora Fatehi is best known for her special dance performances in film - she's featured in songs in films such as Baahubali: The Beginning, Rocky Handsome, Satyameva Jayate, Kick 2, Stree, Street Dancer 3D and Marjaavaan.She's participated in reality TV shows such as Bigg Boss 9 and Jhalak Dikhhla Jaa 9. Nora Fatehi also appeared as a guest on the show Dance Deewane in place for Madhuri Dixit for a few episodes.