"We also listen to songs of various languages that we don't understand," said BTS 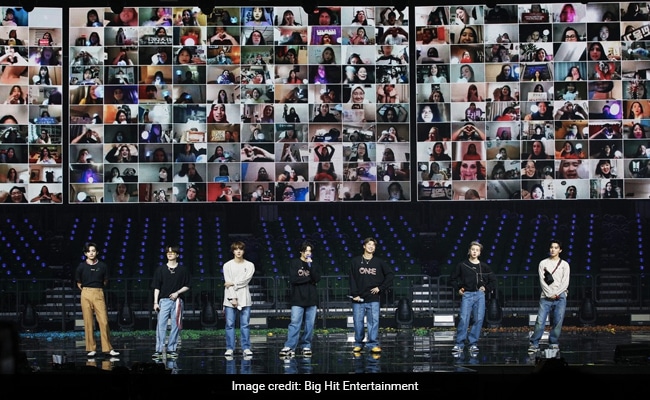 BTS aren't just any boy band - they are THE boy band, the quickest group since The Beatles to have four #1 albums on the Billboard charts, the first Asian and non-English speaking music act to sell out London's Wembley Stadium and those are only two of the several records they've set. This is what global domination looks like and here's the kicker - BTS released their first English single Dynamite only this year. That their music is in Korean and Japanese has not dented the seven-member band's appeal in any way; BTS led the 'Korean Wave' across the world and their 'armies,' which is how fans collectively refer to themselves, span the globe - the likes of music maestro A R Rahman is a fan.

Speaking exclusively to NDTV's Rohit Khilnani, BTS said, "There is no language barrier when it comes to music. We also listen to songs of various languages that we don't understand. Music is a medium that connects people. And we thank ARMY for enjoying our songs even though they don't speak the language."

BTS have been particularly busy during the pandemic. Apart from releasing Dynamite in August, they performed an online concert and will release their new album BE on November 20. "More than ever, during this global pandemic, music transcends barriers, nationalities and age. It's encouraging for us to hear how our music gave some energy through a difficult period," BTS told NDTV.

It hasn't been easy, of course. "Our fans are of course the driving force that motivates us. We are here today because of them. For this concert, we were able to see our fans through screens and we could also hear their voices. It's been such a long time since we last saw them, so it was a very emotional and overwhelming experience. We were also thankful that so many fans joined us to enjoy the concert. With the help of technology, we could narrow the gap between us and our fans, which makes us feel comfortable with online concerts," BTS said.

BTS, also known as the Bangtan Boys, comprise seven members - Jin, Suga, J-Hope, RM, Jimin, V and Jungkook. Considered among the most influential celebrities in the world, BTS are also closely involved in philanthropy and have partnered with UNICEF for an anti-violence campaign. They were named 'Next Generation Leaders' by TIME magazine in 2018.