"No, It's Not A Set": Kajol's Latest Pic Is From This City

Kajol is vacationing in Moscow with her family 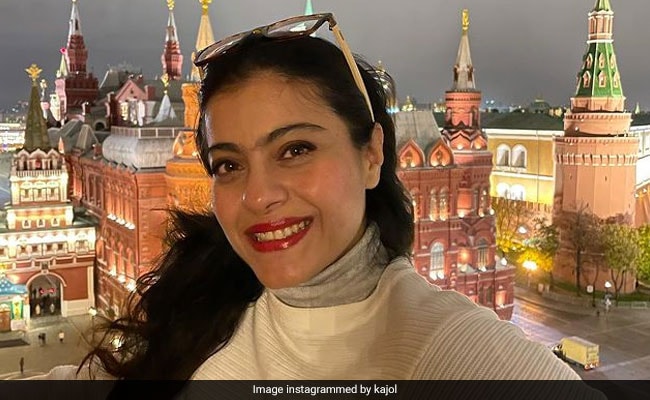 Is there any Bollywood cinephile who is not in love with Kajol? We think not. Her onscreen charm is as irresistible as her offscreen candour, and we get a healthy dose of both on her social media profiles. The actress, who is currently vacationing in Moscow with her family, has been keeping fans happy with regular holiday updates and posts. Latest on the Instagram feed is a selfie from Russia that has a background befitting a fairytale. And putting all our doubts to rest, Kajol declared in the caption that it's all real and this is how the “stunning city” of Moscow really looks.

Sharing the photo, Kajol said, “No it's not a set. It's all natural.” With her trademark smile making an appearance in the image, Kajol had fans fawning over her new photo.

Kajol is using her holiday time to make everlasting memories with her family. Recently, the actress shared a picture from Moscow in which she is seen with her son Yug. Also accompanying them in the Instagram Stories post is Kajol's sister-in-law Neelam Devgan Gandhi and nephew Aman Gandhi. The happy bunch were at a restaurant in Moscow. In addition to the family photo, we were also treated to a solo photo of Kajol from the lunch. Sharing the image, Kajol wrote: "Spacibo Russia...#moscowdiaries #lunching #foodies #soho."

And while Kajol is having the time of her life, she has not forgotten to tell her daughter Nysa just how much she misses her. In a selfie that features the mother-daughter duo smiling for the camera in a car, Kajol wrote, “Miss you, baby girl.” Actress Dia Mirza replied to the image with two red-heart emojis.

Kajol's Instagram timeline often features images of her family, especially her children. Recently, on the occasion of son Yug's birthday, she shared a photo of him and wrote, “All of 11 and the smile in my heart always.”

She further added, “And now we come to today and I can finally say I passed with flying colours. U are what we all say women should be so fly high my darling and don't tone down ur shine for anyone. I've got your back! Happy adulthood.” Sweet, isn't it?