Just A Pic Of Kajol And Daughter Nysa, Twinning In White

Kajol is currently vacationing in Moscow with her family 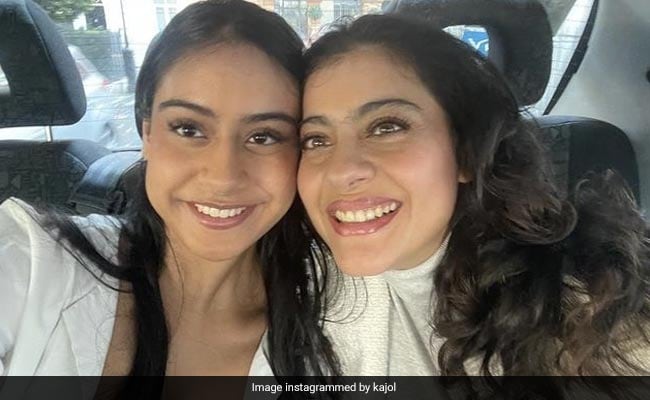 Bollywood actress Kajol has left an adorable post for her daughter, Nysa Devgan, on social media. Kajol, who is currently in Moscow, has shared a selfie featuring herself and Nysa. In the photo, we see both the mother-daughter duo gleefully posing for the camera inside a car. Their smiles are quite infectious for a viewer. But it was Kajol's caption that gave this snapshot a bittersweet touch. The actress wrote, "Miss you, baby girl." The sweet update has left our hearts melting. Actress Dia Mirza dropped two red-heart emojis under the frame.

Here is the picture:

Next up is a photo of Kajol in which she is enjoying her time at a restaurant in Moscow. The caption read, "Spacibo Russia." She added "Moscow diaries," "lunching" and "foodies" in the hashtags to her post. We also spotted her having a gala time with her sister-in-law Neelam Devgan Gandhi and nephew Aman Gandhi.

Kajol shares a strong bond with Neelam Devgan Gandhi and her nephews, Aman and Daanish. Proof? Take a look at this oh-so-adorable frame from the Raksha Bandhan celebrations, this year. Can't miss Yug's reaction here. Can you?

Now coming back to Kajol and her children, Nysa and Yug. The actress never misses an opportunity to celebrate them. On Nysa's 18th birthday, Kajol penned a heartwarming note for her “darling”. Calling Nysa's birth "the biggest exam of my life," Kajol said, “I was so nervous when u were born. It was the biggest exam of my life and I had all those fears and feelings that go with it for a whole year at least.”

Kajol added, "and, now we come to today and I can finally say I passed with flying colours. You are what we all say women should be so fly high my darling and don't tone down ur shine for anyone. I've got your back! Happy adulthood."

This is what Kajol said on Yug's 11th birthday.

Kajol will be seen next in The Last Hurrah. Her last movie outing was Tribhanga.