"It's a lunching," wrote Kajol 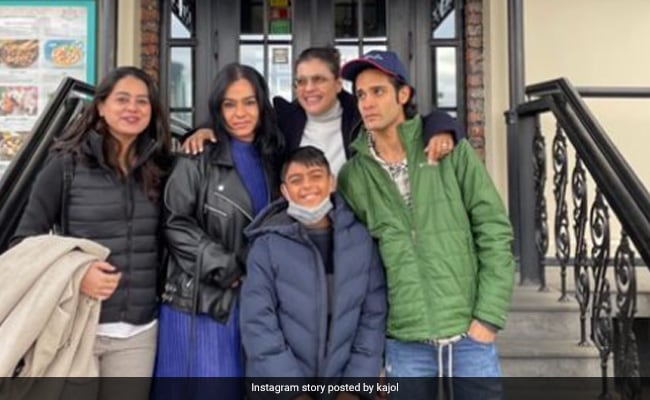 Kajol with her family in Moscow. (Image courtesy: Kajol)

Kajol is currently spending quality time with her family in Moscow, Russia. The actress. On Tuesday, gave us a sneak peek into her fam-jam with her sister-in-law Neelam Devgan Gandhi and nephew Aman Gandhi at a restaurant in Moscow. The photo also features Kajol's son Yug. Neelam is Ajay Devgn's sister and she has two sons - Aman and Daanish. Sharing her solo photo from the get-together in an Instagram post, Kajol wrote: "Spacibo Russia...#moscowdiaries #lunching #foodies #soho." She shared other pictures on her Instagram stories. "It's a lunching," she captioned one of them.

See pictures of Kajol and her family from Russia here:

Recently, Ajay Devgn celebrated Yug's birthday with an "all boys party" in the Maldives. Aman and Daanish Gandhi were also there. From their party, Ajay shared this photo and wrote: "Yug wearing his safety jacket, that's me, when we hit the waters at Maldives...A few of the many defining moments that we had during our short September break."

Kajol, the daughter of Tanuja and Shomu Mukherjee, made her acting debut with the 1992 film Bekhudi, in which she co-starred with Kamal Sadanah. She went on to feature in several hits like Baazigar, Dilwale Dulhania Le Jayenge, Kuch Kuch Hota Hai, Kabhi Khushi Kabhie Gham..., Fanaa, My Name Is Khan, Pyaar Kiya To Darna Kya, Pyaar To Hona Hi Tha and Ishq, to name a few.

She recently announced her new project titled The Last Hurrah.

Aamir Khan On Taking A Break From Acting: "Want To Be With My Family"