"We have to fight through some bad days to earn the best days of our lives," wrote Maanayata 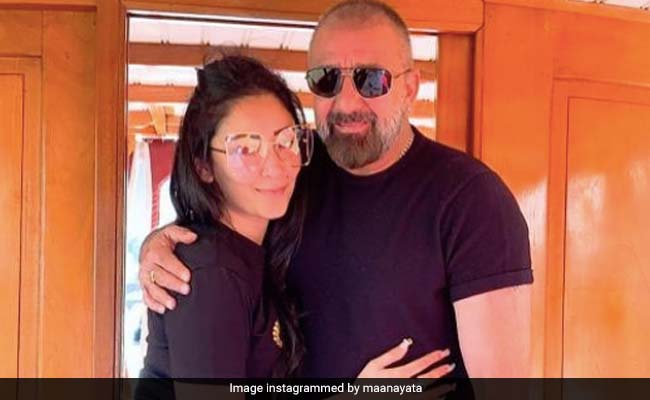 Sanjay Dutt's wife Maanayata, in her latest inspirational post, shared a picture of the actor and wrote about never quitting the fight to earn the best days of their lives. Sanjay Dutt is currently undergoing medical treatment and he has been photographed outside Mumbai's Kokilaben Hospital a couple of times since last month. In her latest post, Maanayata borrowed a few lines from the track Ruk Jana Nahi from Vinod Khanna and Tanuja's 1974 film Imtihan and wrote: "Ruk jana nahin tu kahin haarke...kaanto pe chalke milenge saaye bahaar ke! We have to fight through some bad days to earn the best days of our lives! Never quit! #inspiration #courage #strength #positivity #dutts #challenging yet #beautifullife."

Sanjay Dutt was hospitalised after he complained of breathlessness on August 8. At the hospital, he was tested negative for COVID-19 and two days later, he was discharged. Soon after that, Sanjay Dutt announced that he is taking a hiatus from work because of health issues without sharing details about his treatment.

Since Sanjay Dutt's "short break from work" announcement, Maanayata has been sharing posts about "positivity" and life on social media. In her previous post, she shared a picture of herself and wrote: "Sometimes you just have to stay silent because no words can explain what is going on in your mind and heart."

Before that, she posted a photo of their children Shahraan and Iqra and captioned it: "Sands are shifting... God...protect your peace...answer your prayers."

Sanjay Dutt was last seen in Sadak 2, which released last month on Disney+Hotstar. His upcoming films are KGF: Chapter 2, Torbaaz, Bhuj: The Pride Of India, Shamshera and Prithviraj