A Family-Only Pic With Neetu Kapoor, Ranbir, Riddhima And Samara 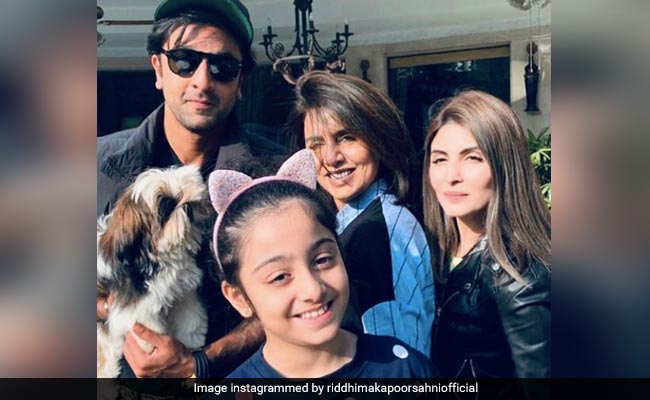 Rishi Kapoor's daughter Riddhima, who is a Delhi-based jewellery designer, is currently in Mumbai with her family and has been sharing glimpses of her precious family moments on Instagram. On Sunday, Riddhima Instagrammed a throwback photo, featuring brother Ranbir, mom Neetu and daughter Samara. Riddima captioned the fam-jam photo with just the red heart icon. Riddhima drove Delhi to Mumbai after her father Rishi Kapoor's death on April 30. Riddhima couldn't attend the funeral but she was part of the prayer meet held on May 2. Riddhima, along with Neetu and Ranbir, immersed Rishi Kapoor's ashes in Mumbai's Banganga Tank on May 3.

Here's a look at the happy family photo of the Kapoors:

A post shared by Riddhima Kapoor Sahni (RKS) (@riddhimakapoorsahniofficial) on May 17, 2020 at 4:48am PDT

After Rishi Kapoor's death, Riddhima has been sharing throwback memories from her childhood album on her Instagram stories. Rishi Kapoor's funeral was watched by Riddhima on FaceTime, live streamed by Alia Bhatt, who is dating Ranbir Kapoor. Alia also accompanied Ranbir to Rishi Kapoor's prayer meet last week. It was also attended by Shweta Bachchan and her daughter Navya Naveli Nanda. Riddhima shared a few photos from the prayer meet with a heart-wrenching note for her father: "Your legacy will live on forever... We love you."