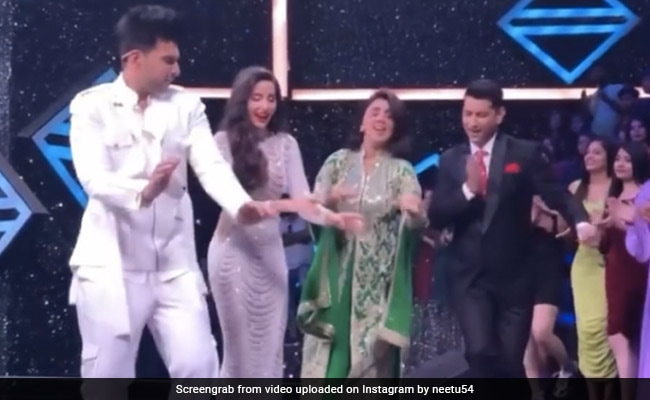 Rishi Kapoor died on April 30, 2020, after a long battle with cancer. His death left a void like no other in the hearts of his family, fans and the Hindi film industry. Ahead of his death anniversary, actress Neetu Kapoor, Rishi Kapoor's wife, has shared a heart-warming video as a tribute to the actor. In it, Neetu Kapoor reveals that her colleagues on a reality show paid homage to Rishi Kapoor by dancing to some of his biggest hits. She even joined them and shared a video on Instagram. In the clip posted, Neetu Kapoor is joined by Norah Fatehi, Karan Kundrra and choreographer Marzi Pestonji as they dance to the number Humko Tumse Ho Gaya Hai Pyar from Amar Akbar Anthony.

Earlier this month, Neetu Kapoor's son, actor Ranbir Kapoor got married to actress Alia Bhatt. Sharing pictures from the intimate ceremony that was the talk of the town, Neetu Kapoor expressed just how much the family was missing Rishi Kapoor. Sharing a picture with the groom, she wrote, “This is dedicated to Kapoor Saab…your wish has been fulfilled.”

A while ago, Neetu Kapoor also shared a throwback image featuring Rishi Kapoor taken during their engagement. “Fond memories of Baisakhi day, as we got engaged 43 years back on April 13, 1979,” she wrote in the caption. Replying to the post, photographer-producer Atul Kasbekar said, “I think of RK often. Effortless talent. Mad, loud, warm, heart of gold that he wore on his sleeve. Taken way too soon.”

Neetu Kapoor and Rishi Kapoor got married in 1980. They have two children together Ranbir Kapoor and Riddhima Kapoor Sahni. On the work front, Neetu Kapoor will be seen in Jug Jugg Jeeyo with Varun Dhawan, Kiara Advani and Anil Kapoor.