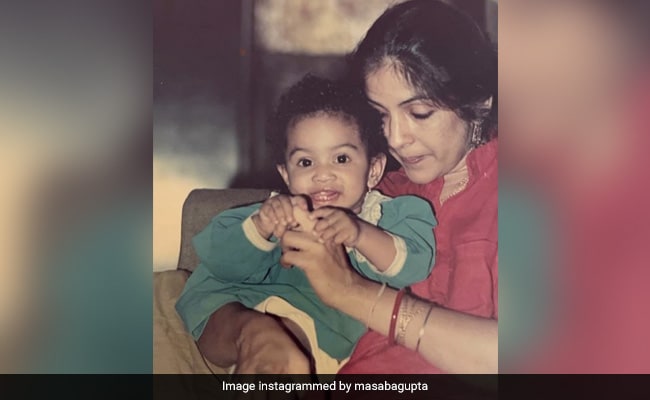 Designer Masaba Gupta shared an excerpt from her mother Neena Gupta's new autobiography, Sach Kahun To, and it will break your heart. The excerpt, screenshotted by Masaba, relates her mother's worries about money before giving birth. Masaba was born to Neena Gupta and cricketer Viv Richards in 1989 - her parents never married and Neena Gupta has been open about the challenges of being a single mother. At the time, Ms Gupta was a leading light of the arthouse cinema movement, having appeared in films like Mandi, Utsav and Trikaal. These roles did not necessarily reflect in her finances and the actress was left worrying how to cover her hospital bill after giving birth.

In her autobiography, Neena Gupta reveals that she fretted about not being able to afford a Caesarean section, were she to need one - she only had enough money in her bank to pay for a natural birth which cost about 2,000 then. By the happiest of chances, Ms Gupta caught a lucky break. "As my due date approached, I started to worry because I had very little money in my account. I could afford a natural birth because it would cost only 2,000. But I knew if I had to have a C-section, I would be in trouble because the surgery cost almost 10,000. Luckily, a tax reimbursement of 9000 came through a few days before my delivery and I finally ended up with 12,000 in my bank account," the excerpt from her book reads. A second excerpt, included in Masaba's post, reveals that Ms Gupta did indeed deliver her daughter by Caesarean section.

In her caption, Masaba Gupta revealed how reading about her mother's experiences has impacted her: "As I read mom's biography, I learn so many things and the hardships she has had to endure. I work very hard every single day of my life and never ever let anyone not give me what I deserve only to make sure I can pay her back for bringing me into this world... with interest!"

Neena Gupta is now married to chartered accountant Vivek Mehra; the couple spend part of their time in their Mukteshwar home - they are there right now as are Masaba and her boyfriend, actor Satyadeep Misra. Neena Gupta shared this home scene:

At 62, Neena Gupta has found the stardom that proved elusive in the first flush of her career. Standout gigs in her recent body of work include 2018 film Badhaai Ho and web-series Panchayat. She also appeared with her daughter in the series Masaba Masaba.