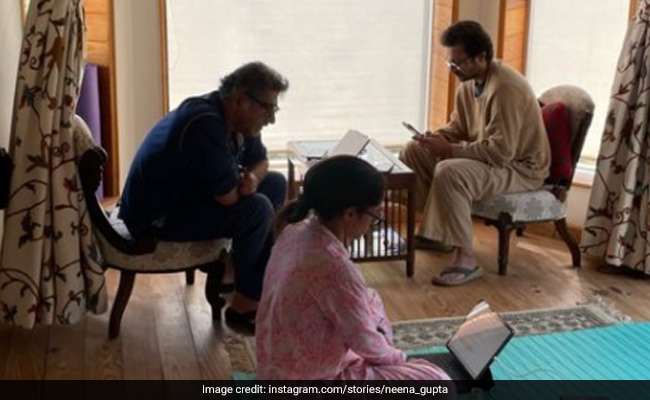 Neena Gupta, who is currently living with her husband Vivek Mehra and daughter, designer Masaba Gupta, in Mukteshwar, Uttarakhand, shared a glimpse of how a typical work day looks like in her house. The 61-year-old actress shared a photo on her Instagram story, in which her daughter and husband can be seen working from home together. But there's one more thing that made the photo extra special. It also features Masaba Gupta's boyfriend, actor Satyadeep Misra. While Masaba Gupta can be sitting on the floor, Satyadeep Misra can be seen scrolling through his phone on a chair slightly away from her.

Earlier in the day, Neena Gupta posted a video of herself nailing the Dhanurasana like a pro at her home. Referring to her loud breathing noise, Neena wrote in the caption: "Dhanurasan with too much noise" with laughing emoticons.

Back in January, Masaba Gupta posted a photo of herself chilling at her mom's house with Satyadeep Misra. If you haven't seen that yet, take a look:

In terms of work, Neena Gupta was last seen in Sardar Ka Grandson. She has a film titled Dial 100 and the second season of Masaba Masaba lined up.