Need Workout Motivation? Here's A Video Of Sanjay Kapoor Killing It In The Gym

The actor said that he was getting back to weight training after 19 months. 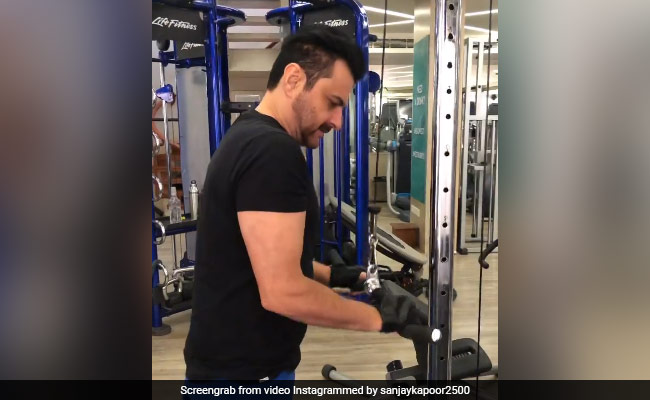 Sanjay Kapoor In a still from the video.(Image courtesy: sanjaykapoor2500)

Hitting the gym after taking a break from working out should be considered an achievement in itself. While the thought of sore muscles can keep even the best of us away from the gym, we have received some mid-week fitness inspiration, courtesy of actor Sanjay Kapoor. The actor shared a video on Tuesday in which he is seen indulging in some intensive weight training. In the Instagram video, Sanjay Kapoor can be seen focussing on his breath as he trains. The actor looks completely at home while exercising. However, the actor divulged in the caption that he was, in fact, getting back to weight training after over a year.

Sharing the video, Sanjay Kapoor wrote, "Weight training after 19 months." Reacting to the clip, director Punit Malhotra cheered him on with a bunch of emojis. Several fans of the actor expressed their support by dropping fire emoticons in the comments.

Sanjay Kapoor -- much like his brother, Anil Kapoor -- is known for his age-defying looks and the video suggests that a healthy dose of exercise may have a part to play in this. In addition to such fitness clips, the actor also often gives his social media followers a peek into his life. For instance, Sanjay Kapoor shared a throwback image from the launch party of his film Hum Tum Aur Woh. In the image, he can be seen with his wife Maheep Kapoor, Anil Kapoor, Padmini Kolhapure and Deepak Tijori. Replying to the photos, Maheep Kapoor said, "Came straight from my ni gori kaisi jawani hai shoot. Fun days," referring to a music video she had appeared in, in the 90s.

He also shared an image from the sets of the 1983 film Woh Saat Din, which featured Anil Kapoor and Padmini Kolhapure in the lead roles. In the photo, he is seen interacting with Padmini Kolhapure and another woman whose face remains hidden. Sharing some trivia in the caption, he wrote, "38 years of Woh Saat Din. My job was to entertain Padmini. What an outstanding film." Replying to the post, director Farah Khan wrote cheekily, "She and the person next to her looking very entertained."

However, our favourite has to be this clip of a song from the film Raja that Sanjay Kapoor appeared in, opposite Madhuri Dixit. The caption read, "26 years of Raja. We started shooting for Raja with this song in Ooty, Zara phir se kehna was the first shot I gave. I cannot thank Madhuri Dixit enough for making me so comfortable on set. I never felt I was working with a super super super STAR. What a super team we had..."

Sanjay Kapoor first appeared in the 1995 film Prem opposite Tabu. He has also featured in successful movies such as Raja, Kal Ho Na Ho and Shaandaar. In addition to films, he also acted in the television series, Dil Sambhal Ja Zara and the web series, The Gone Game. Sanjay Kapoor will be seen next opposite his Raja co-star Madhuri Dixit in the Netflix original Finding Anamika.