Navya Naveli Is Following Abhishek Bachchan's Footsteps. Her Response To A Troll

Replying to the troll, Navya Naveli reminded the user of the pandemic situation: "I'm sure you're aware we're in the middle of a pandemic?" 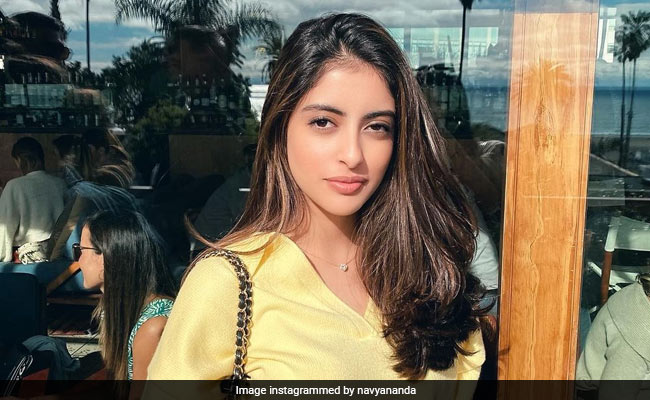 Navya Naveli Nanda, who is a strong advocate of social issues, has taken a clue or two about handling trolls from her uncle, actor Abhishek Bachchan. The 45-year-old star, often at the receiving end of snide comments mocking his career, has a reputation for shutting down trolls with sometimes snappy and sometimes sarcastic responses. Navya Naveli did just that on Instagram recently. Navya's NGO Project Naveli recently inaugurated a "Period Positive Home" in the Maharashtrian town of Gadchiroli and shared a bunch of photos from on Instagram. Navya, who is currently in New York, spotted an Instagram user asking: "If the project meant so much to you, then where were you in the inauguration?" Replying to the troll, Navya Naveli reminded the user of the pandemic situation: "I'm sure you're aware we're in the middle of a pandemic?" 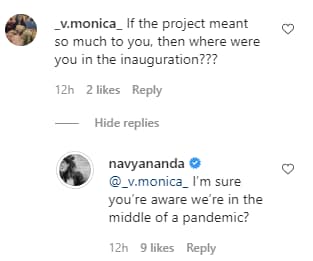 Meanwhile, Navya's post on her recent initiative garnered cheers from the likes of Sonali Bendre, who wrote: "Amazing", while Tina Ambani added: "So proud of all the work you do Navya."

Earlier this year, Navya Naveli trended a great deal for her response to a comment on her mother Shweta Bachchan's profession. Adding a smiley, Navya Naveli responded to the troll with a list of titles for Shweta Bachchan and wrote: "She's an author, writer, designer, wife and mother." Calling out the troll in a separate Instagram story, Navya added: "Being a mother and wife is a full-time job. Please don't discredit women who are housemakers. Their role is so crucial in the upbringing of a generation that will hopefully support their contribution instead of tearing it down." 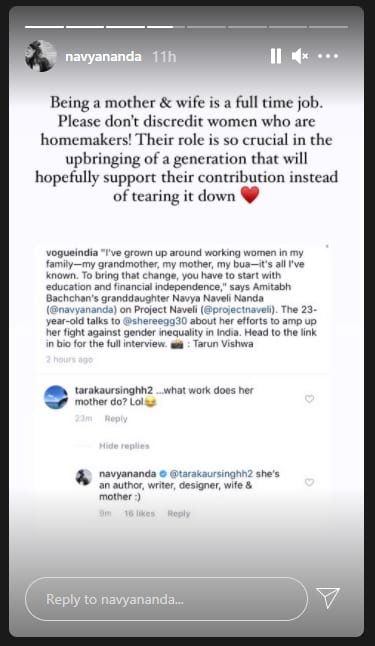