A fan tweet said that Abhishek's worth as an actor has been "overshadowed" by the weight of his surname. 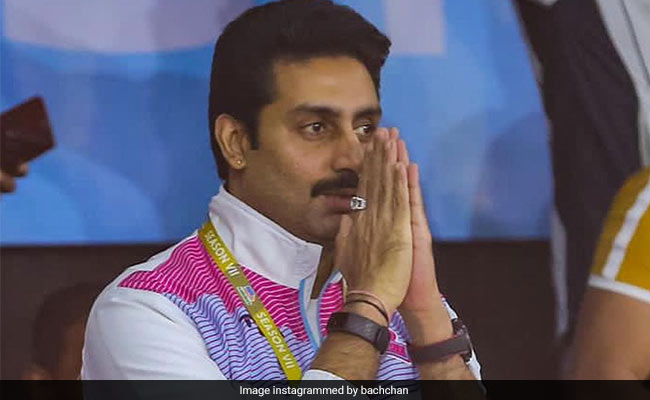 Abhishek Bachchan, known for his dignified trollbusting on Twitter, also makes time for those who share compliments about him. The 45-year-old actor has been spending the last couple of days responding to both fans and critics of his work in The Big Bull - he's one of the rare celebs who actually does this and it's always with dignity, grace and humour. In one tweet exchange, Abhishek thanked a commentor who describes him as an "underrated" and "amazing" actor. Abhishek Bachchan is often ridiculed by trolls for apparently not living up to his father Amitabh Bachchan's legacy - mind you, he knows just how to handle these comments with a good dose of sass and sarcasm. In a delightful change of tone, the recent fan tweet suggested that Abhishek's worth as an actor has been "overshadowed" by the weight of his surname. "Very kind of you to say. Thank you," Abhishek responded.

Abhishek Bachchan also thanked someone who wrote about preferring The Big Bull, loosely based on financial wheeler dealer Harshad Mehta, to Scam 1992, a web-series on the same subject. The Big Bull has been repeatedly and unfavourably compared to the series. "It seems I am the only one who loved The Big Bull more than the Scam series. Not an Abhishek Bachchan fan but will be honest. He is mind blowing in the film, made me remember his Guru performance," read the tweet Abhishek responded to. He wrote back simply with a "Thank you."

Also, Abhishek chimed hilariously in after a troll accused Sophie Choudry of "getting paid" after she tweeted to say how much she liked The Big Bull. "Wait... what? Sophie you should have told me. Not fair! I would have paid you for all the previous tweets to. Come on," read Abhishek's tweet dipped in sarcasm.

In the recent past, Abhishek Bachchan has been spotted responding to trolls, commenting on his acting skills and his new release The Big Bull. To a certain user describing him as a "3rd rate" actor, Abhishek wrote: "Hey man, as long as I've not disappointed you, I'm happy. Thank you for taking the time out to see our film." Meanwhile, responding to a Twitter user who asked the actor why he should watch The Big Bull, Abhishek came up with a sharp reply: "I'm in it."

I did watch #Scam1992 already, tell me one reason to watch #Thebigbull again. @juniorbachchan

Abhishek Bachchan's The Big Bull recently released on Disney+Hotstar. He will next be seen in Bob Biswas, in which he plays a contract killer, based on a character from the movie Kahaani.