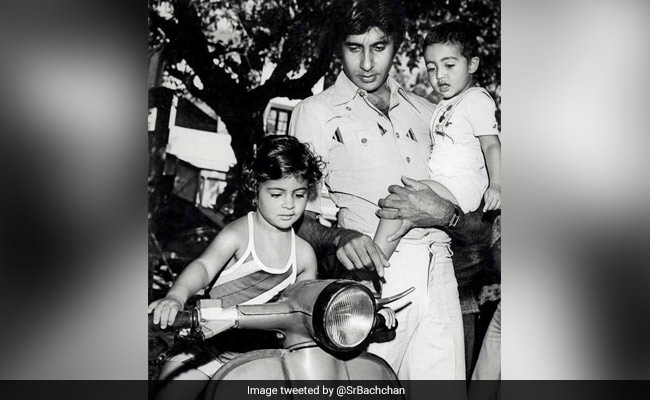 A throwback of Big B with Shweta and Abhishek. (courtesy SrBachchan)

Navya Naveli Nanda, daughter of Shweta Bachchan and Nikhil Nanda, is a graduate from New York's Fordham University. She is the co-owner of the Aara Health, an online platform which discusses health issues. Shweta Bachchan Nanda made her debut as an author with the book Paradise Towers.

In terms of work, Amitabh Bachchan was last seen in Shoojit Sircar's Gulabo Sitabo, co-starring Ayushmann Khurrana. The actor's upcoming projects include Ayan Mukerji's Brahmastra, co-starring Alia Bhatt and Ranbir Kapoor, and Chehre, alongside Emraan Hashmi. He will also be seen in the sports drama Jhund. Last year, Big B signed a film called Mayday, which will be directed by Ajay Devgn and it will star Rakul Preet Singh.

In terms of work, Abhishek Bachchan will next be seen in a film based on Bob Biswas, which is being produced by Shah Rukh Khan's Red Chillies Entertainment. The actor two releases last year, including Ludo and Amazon Prime Video's web-series Breathe: Into The Shadows. He was last seen in The Big Bull.