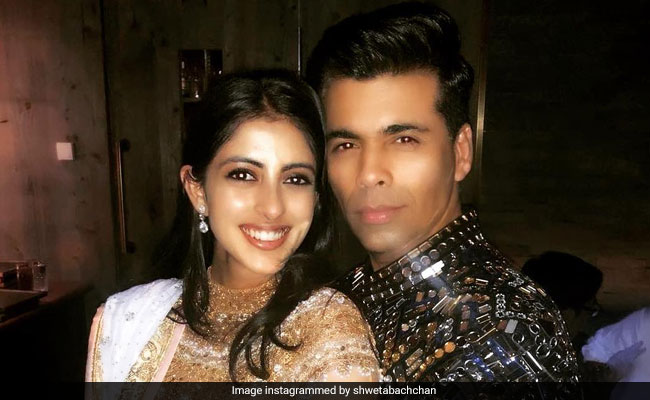 Shweta Bachchan Nanda shared a fabulous picture of her daughter Navya Naveli Nanda posing with filmmaker Karan Johar from the sangeet ceremony of Akash Ambani and Shloka Mehta, which was held in Switzerland earlier this month. "Troopers," Shweta captioned the picture, in which Navya, 21, looked spectacular in a white and gold ensemble while Karan Johar was dressed in a lavish mirror-work outfit from Manish Malhotra label. Navya is the elder of Shweta Bachchan and Nikhil Nanda's two children. Her brother Agastya is 18-years-old. The creme de la creme of Bollywood, including Shah Rukh Khan, Aamir Khan, Alia Bhatt and Ranbir Kapoor, among others had turned up for the Ambani-Mehta mega Switzerland bash. Picture and videos from their two-day stay in St Moritz trended for days but more on that later.

Take a look at Navya and KJo's picture here:

The Ambanis and the Mehtas jointly hosted a carnival-themed party followed by a lavish sangeet ceremony for Akash and Shloka in Switzerland. At the sangeet ceremony, Coldplay frontman Chris Martin performed and so did The Chainsmokers.

The upcoming Ambani-Mehta wedding touted to be the event of the year. Akash, son of Reliance Industries Chairman and Managing Director Mukesh Ambani, will marry Shloka Mehta, youngest daughter of diamond merchant Russell Mehta, on March 9 in Mumbai. A wedding reception for the newlyweds will be held on March 11 and before that a wedding celebration party will be hosted on March 10. As per an IANS report, several Bollywood celebrities will perform at the party.