"Sowing the seeds of faith in both of them from a young age," wrote Shilpa Shetty 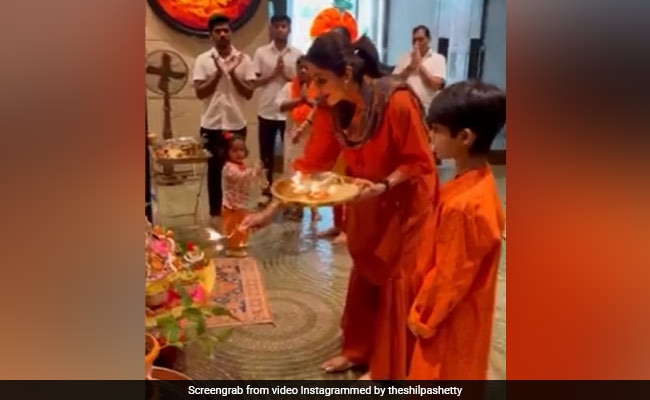 Like every year, Shilpa Shetty shared snippets from her Navratri celebrations at home with family. The actress posted a video from her festivities with daughter Samisha and son Viaan Raj Kundra. In the video posted by Shilpa, they can be seen dressed in colour-coordinated orange outfits. "My kids and faith. Some things can't just be passed down to the next generation without them witnessing us doing it. It's important to me that my kids grow up with the same values and traditions that our parents inculcated in us. Sowing the seeds of faith in both of them from a young age was something I always intended doing... because I know that faith grows stronger and becomes a lot more deep-rooted as we grow older and helps us experience life in all its glory surrendering to the almighty," she captioned the post.

Shilpa Shetty made her Bollywood debut with the 1993 thriller Baazigar, which also featured Kajol and Shah Rukh Khan in the lead roles. She is best-known for her performances in films such as Main Khiladi Tu Anari, Dhadkan, Life In A...Metro, Apne, to name a few.

The actress married businessman Raj Kundra in 2009. The couple are parents to a son named Viaan Raj Kundra and last year, they made a surprise announcement on social media, in which they revealed the arrival of the latest addition to the Kundra family - a baby daughter named Samisha.

Shilpa Shetty was last seen in Hungama 2, co-starring Paresh Rawal, Meezaan Jaaferi and Pranitha Subhash. She was also seen as one of the judges on the TV reality show Super Dancer Chapter 4, alongside choreographer Geeta Kapoor and filmmaker Anurag Basu. The actress will next be seen in Sabbir Khan's upcoming film Nikamma.